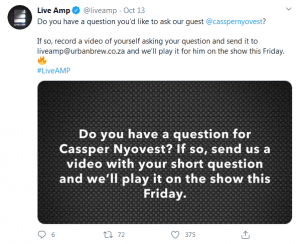 According to the hosts of the show, the decision to include the hip hop star in the show was based on deliberate requests from viewers.

Cassper performed one of his hit songs Like “Any Minute Now (AMN)”, “BongiNkosi” from a collaboration with Zola 7.

He delighted his fans with the song “BongiNkosi”, which he released on the album, the cherished work of his son Khotso, long before the September 11 premiere

By the way, a few days ago on Twitter Live AMP asked Cassper Nyoveat fans to refrain from asking questions that could be asked to the rapper in the LIVE AMP collection, which was followed by a storm of questions.