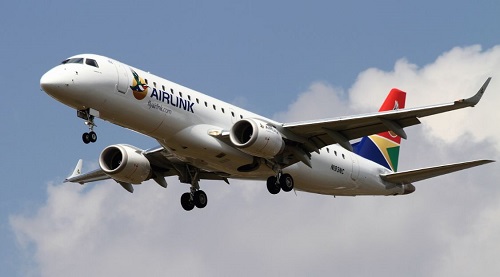 They said that the new changes was to distinguish themselves as a totally independent airline in the country.

“We have officially changed our company name from “SA Airlink” to “Airlink”, as part of our strategy to distinguish ourselves as a totally independent airline.”

In a statement released on Monday 26 October 2020, states:

Airlink, the privately-owned airline, has officially changed its company name from “SA Airlink” to “Airlink”, as part of its strategy to distinguish itself as a totally independent airline.

Earlier this year Airlink ended its 23 year franchise agreement with South African Airways and began operating and issuing tickets on its own “4Z” code and designator. This has liberated Airlink and enabled it to forge commercial ties with other international airlines that carry passengers and cargo to and from destinations across Southern Africa. It has subsequently signed collaborative “interline” agreements with Qatar Airways, Emirates, British Airways, KLM, Air France and United.

In addition, Airlink flights are now sold on www.flyairlink.com and no longer via SAA’s website.

“The subtle, but significant, the name change is a key element of our re-positioning, recovery and growth strategy,” said Airlink CEO and Managing Director, Rodger Foster. “It should be seen together with recent commercial developments, including the interline agreements, the launch of our own mainline South African domestic services and new regional routes linking Johannesburg with Maputo and Windhoek. Airlink plans to announce additional new and reinstated routes in the coming weeks and months,” he explained.

Airlink’s new Johannesburg-Cape Town and Johannesburg-Durban services, which are South Africa’s domestic trunk routes, enable Airlink passengers to connect with our other domestic, long-haul and regional flights on a single ticket.

Airlink’s modern training and maintenance facilities ensure the airline’s self-sufficiency for pilot and cabin crew training as well as for keeping its fleet safe and in prime working condition.

Airlink took advantage of the COVID-19 pandemic and associated lockdowns to focus on its business continuity and future position in what has become a completely changed market. “The measures we have taken have all been in the best interests of the company, its employees, customers, suppliers, and shareholders. Today Airlink is a financially sound and robust business,” said Mr Foster.

The most visible change will be the introduction of a new corporate livery and branding, which will soon be revealed.

“In the meantime, we continue to remain focussed on the job at hand, operating our schedule and keeping our customers happy by flying them to their destinations safely, on time and affordable,” said Mr Foster.

Airlink is a privately-owned regional airline serving a comprehensive network of smaller destinations throughout Southern Africa. We are now operating independently under our own unique 4Z flight code offering more freedom, more choices and more travel opportunities. When you see the sunbird icon on our aircraft, think Airlink. You’ll know that you’re travelling with Southern Africa’s largest (measured by flight movements) independent airline. Airlink has more than 50 commercial jetliners operating throughout Southern Africa. Last year we carried 2 million customers on more than 63 000 flights, on 55 routes to 39 destinations in nine African countries and St Helena Island.

Airlink’s on time performance is consistently better than 95% and this is a clear indication of our determination and commitment to remain synonymous with customer centricity, punctuality, service excellence, and reliability. Airlink is proudly the most on time South African airline for 2020 as measured by the Airports Company of South Africa.