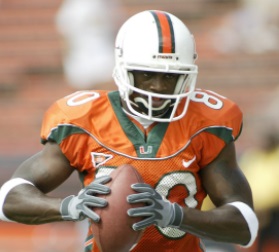 Akieem Jolla has been identified as the man who was stabbed to death in Algier, Sunday morning.

Akieem Jolla was a former Miami wide receiver who has played in 23 games in two seasons (redshirted in 2003 after playing as a true freshman in 2002). He has 20 career catches for 219 yards (11.0 average) and two touchdowns. He spent his final collegiate season at New Mexico State in 2006 where he caught 23 passes for 135 yards.

According to information from the New Orleans Police department, the tragic incident happened near Newton Street and L. B. Landry Avenue.

Akieem Jolla who hard severe stab injuries was rushed to hospital by paramedics with New Orleans Emergency Medical Services but was declared dead minutes after. He died from the injuries he sustained from the stabbing.

As NOPD homicide investigators continue the process of looking for clues at the scene and talking to people who may have known, seen or heard anything to find out who killed the victim, how and why, the investigation into the killing is far from over, but police said they’re willing to hear from people with information.