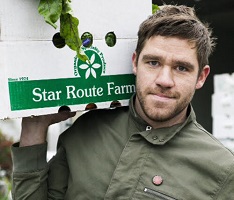 A well-known chef, Todd Shoberg working with the Brewsters Beer Garden in Petaluma has passed away. Todd Shoberg was reported to have tragically died on yesterday September 28 2020.

The 42-year-old chef lost his life in a tragic accident. According to reports from Authorities, Todd’s Mazda 6 sport wagon drifted across the centre divide on Point Reyes-Petaluma Road and crashed into a Peterbilt dump truck.

The tragic incident happened around 9:10 am Monday morning. Todd was reported to have died at the scene of the incident while the driver of the truck was taken to MarinHealth Medical Center in Greenbrae where he is currently receiving treatment.

The California Highway Patrol is investigating the incident. The cause of the collision is unknown.

Who Is Todd Shoberg? Few Things You Need To Know About Him

Todd grew up in the small farming and fishing port town of Grand Haven, Michigan, where he excelled in sports. Eventually, he was competing on the national level in mountain biking, which led to a fixation on food as a tool to nourish and fuel the human body to exceptional lengths. This was the clear beginning to his culinary journey.

During his adult career as a professional cyclist, Todd worked as almost every front of the house position in restaurants, in whatever parts of the country his training took him. Eventually, Chef Jonathan Perno of San Francisco’s Postrio (Wolfgang Puck), ran into him at his former restaurant in Albuquerque, New Mexico. Under his tutelage, Todd, who had no kitchen experience, was transformed into a capable cook. After being encouraged to come West to San Francisco by Perno, Todd ascended to the level of Sous Chef at various San Francisco stalwarts like Town Hall.

After some time away in the Rocky Mountains continuing his culinary career with top restaurants, Todd returned to the Bay Area to help reimagine the food program for Mill Valley’s Piatti, and later with various sister-restaurants. After helping to open the lauded Stone Brewery’s Liberty Station in San Diego, Todd returned North and cemented his culinary star with Mill Valley’s Molina where he was able to create a new standard in establishing an entire dining experience that transcends ‘just’ really great food and service.