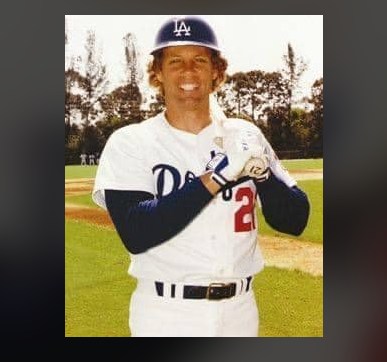 His death was confirmed by the Baseball Player Passings through their Facebook page: 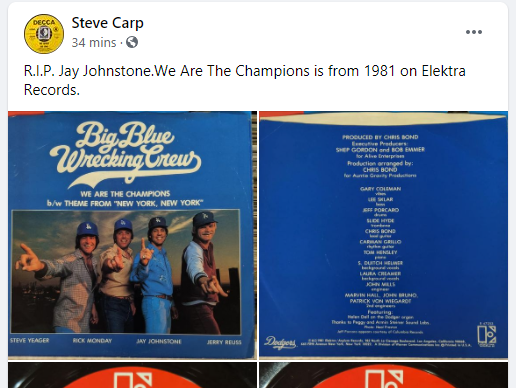 His death was also confirmed by Sports Mase Media through their Social Media page:

“It’s with a heavy heart that I post the passing of friend and Dodger legend and great humanitarian Jay Johnstone.
Here is the families post from earlier today, 9/29/2020.

I am sad to share that my father, Jay Johnstone, passed away on Saturday evening. He was an amazing man and a friend to everyone he met. He loved his teammates and always lit up when he told stories from his playing days. The pranks were his favorite and he pulled plenty of them at home, too! He cherished the friendships he made over the years with each of you and he will watch over all of us forever.

Dodger Stadium lost power at Saturday night’s game within only a couple minutes of his passing and I know in some strange way this must have been his final prank and curtain call. We love you, Jay!”

“A funky farewell to the great Jay Johnstone – legendary prankster, utility man extraordinaire, 2x World Series winner with the Yankees and Dodgers, and a key member of the ’76 (and ’77) NL East champion Phillies squads.”

Johnstone was a member of two World Series teams with the Yankees in 1978 and the Dodgers in 1981. He known as a versatile outfielder with a good sense of humor, known for keeping clubhouses loose with pranks and gimmicks. He later served as a radio color commentator for the Yankees (1989–1990) and Phillies (1992–1993).

Jay before his fame in baseball attended Edgewood High School (West Covina, California) and was signed as an undrafted free agent by the Los Angeles Angels in 1963.

As an Angel, he preserved Clyde Wright’s no-hitter against the Athletics in the seventh inning by catching a Reggie Jackson fly ball 400 feet from home plate, in straightaway center field, just in front of the wall (July 3, 1970). Johnstone was traded along with Tom Egan and Tom Bradley by the Angels to the White Sox for Ken Berry, Syd O’Brien and Billy Wynne on November 30, 1970.

As a Phillie, he went 7-for-9 in the 1976 National League Championship Series against the Cincinnati Reds; however, the Reds swept the series.

As a Dodger, he hit a pinch hit-two run home run in Game Four of the 1981 World Series, against the New York Yankees (the home run rallying the Dodgers from a 6–3 deficit to win 8–7). The victory also enabled the Dodgers to tie the Series at two games each; they won the next two games to win it all.