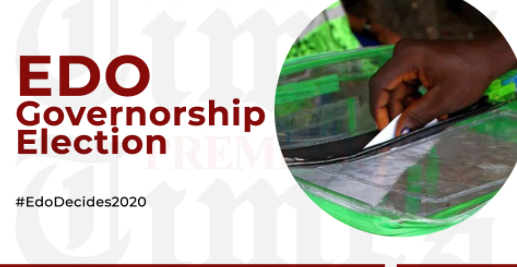 NIGERIA – Edo residents will today decide who will take over the leadership of the state as they go the polling units to choose their governor for the next coming four years.

There have been reports of violence and killings with continued clashes between supporters of the two leading political parties ahead of the Saturday’s election.

Meanwhile, Governor Godwin Obaseki of Edo State, through Crusoe Osagie, his Special Adviser, has cried out that “there is an ongoing deliberate election manipulation in areas where he has strongholds.

Obaseki is the candidate of the Peoples Democratic Party (PDP) and the incumbent Governor of Edo State.

According to him: “Suddenly, card readers are not working in areas where Governor Godwin Obaseki is very popular.

“Voters are being disenfranchised and we are constrained to say that this is sabotage,” Osagie said in a statement to DAILY POST on Saturday during the polls.

“Specifically, in Oredo Ward 1, Unit 20 and other places where the Governor is clearly popular, the card readers are not working.

“The Independent National Electoral Commission (INEC) should prove to Edo voters that it can conduct a credible election in Edo State.”

Supporters of the All Progressives Congress (APC) and the Peoples Democratic Party (PDP) clashed Saturday morning in Edo.

It was alleged that some APC youths attempted to share money but were resisted by their PDP counterparts.

The incident occurred at a polling unit in Oredo Local Government Area.

The footage of the incident shows members of the opposing camps rough handling one another.

Comments in the background suggest that the cause of the fight was money.

Only one policeman can be seen trying to control the situation.

The voters are bitterly complaining as the card readers in this unit have not functioned for once.

Some of the voters who spoke with DAILY POST said they have pushed their complaints to the appropriate quarters.

As at the time of filing this report, voters are still waiting patiently to cast their votes.

The People’s Democratic Party (PDP) has alerted that some election materials have been hijacked in Edo State.

The party raised the alarm via its Twitter handle.

PDP alleged that a leader of the All Progressives Congress (APC) perpetrated the act.

“In Ward 9, unit 15, Ego LGA, a leader of the @OfficialAPCNg in the LGA has hijacked electoral materials and moved the polling booth to his hotel called, “play house”.

“Voters are not allowed to enter the hotel except you are an APC member. @PoliceNg, take note”, the tweet read.

Accreditation is ongoing in many parts of the state.

Electorate are calmly casting their votes with no complaints recorded yet.

In this unit, officials of the Independent National Electoral Commission, INEC, are all on ground.

This is the current situation of things in Estako West Local Government Area where Adams Oshiomole, the former National Chairman of the All Progressives Congress, APC, hails from.

The Local Government is the cynosure of all eyes in this contest.

The INEC staff on ground at APO 1,2,3 maintained the 8:30 am commencement of both accreditation and voting.