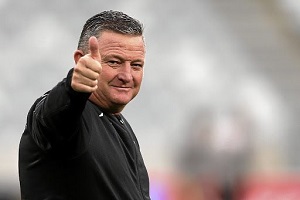 The Kaizer Chiefs has officially announced Gavin Hunt as their new head coach.

Gavin Hunt will be replacing Ernst Middendorp who was sacked after the club failed to win the Absa Premiership title and narrowly lost out to defending champions Mamelodi Sundowns.

Gavin who most recently managed now-defunct club Bidvest Wits has finally accepted the contract to coach the club ahead of the 2020/21 season.

The club also last week announced that it had arrived at an agreement for early termination of the contract of assistant coach Shaun Bartlett.

Hunt spent almost his entire playing career with Hellenic. He had to retire because of an Achilles tendon injury and went straight into coaching.

Hunt’s greatest success came at SuperSport United, where he won three consecutive PSL championships from 2007-08 to 2009-10.