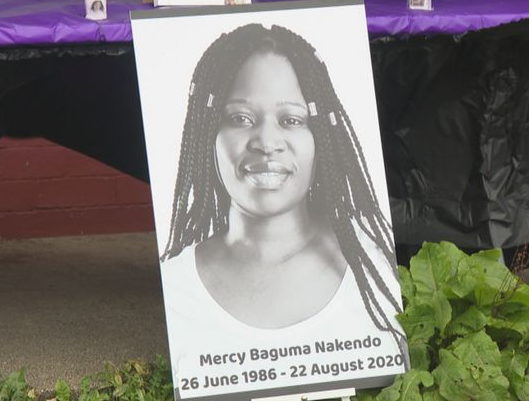 Mercy Bajoma died in the United Kingdom where she was seeking asylum, and her family is now angry with the British authorities over her death investigation.

In August, Mercy’s body was found in an apartment in Glasgow near her crying baby.
But after three weeks, the family did not come close to knowing what had happened, Bagoma’s sister told the BBC at her funeral in Uganda.

Her death in Scotland sparked calls for a change in the UK’s asylum system.
Charity Positive Action in Housing (PAIH), which was helping her along with other charities, said she was “really poor” because she was not able to get a job because her right to work in the UK had expired.

Sarah Nakindo, her older sister, told the BBC: “I must say the family is not happy with the way this compassion issue has been handled … because we expect the UK government will now have answers for us.”

“Three weeks have passed on the road and we do not know the cause of death. This was not reported in the documents shared with us.”

In a family statement issued by the Scottish Mortality Investigation Unit, he said that “the cause of death has not been ascertained pending investigation and that there are no circumstances that would make any additional examination of the remains.”
“We have been silent [since her death], and now we see justice, we want to know what happened to Mercy,” Ms. Nakendo said.
BBC correspondent Patricia Oela reported that the mood at the funeral in Bugiri, eastern Uganda, was bleak with people attending despite coronavirus restrictions.

In August, Adriel’s father, Eric Nanana, Paguma’s one-year-old son, called the police four days after he last called her.
He was worried that he heard his son’s voices crying from within.