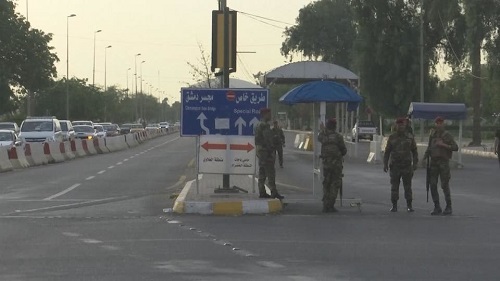 Today, Tuesday, an explosive device exploded in front of the Umm al-Tabool Mosque, next to the bridge adjacent to the entrance to the heavily fortified Green Zone in the Iraqi capital, Baghdad.

The initial news talked about the detonation of an explosive device in front of the Umm al-Tabool Mosque, next to the bridge adjacent to the entrance to the Green Zone on the road leading to Baghdad International Airport Street, where the wheels of American diplomacy passed.

As a result, a security force cordoned off the entrance to the Green Zone from the side of the Qadisiyah area, without any immediate casualties reported.

The Green Zone includes government and parliament headquarters and officials ’homes, in addition to foreign diplomatic missions, including the US embassy, ​​which are under repeated missile attacks.

The explosion comes a few hours after unidentified persons fired two Katyusha rockets at the Green Zone at dawn today, but no injuries were reported.

Washington accuses armed Iraqi factions linked to Iran of being behind the attacks targeting its embassy and military bases in which its soldiers are deployed in the country.

Armed Shiite factions, including the “Iraqi Hezbollah Brigades,” had threatened to target the locations of US forces in the country if they did not withdraw in compliance with the parliament’s decision to end the military presence there.

On January 5, the Iraqi parliament voted, by majority, to end the foreign military presence on the country’s territory, following the killing of the Iranian Quds Force commander, Qassem Soleimani, accompanied by the deputy head of the Popular Mobilization Authority, Abu Mahdi Al-Muhandis, by US bombing near Baghdad airport.

Russian media have also reported conflicting information about the targeting of a convoy of foreign diplomats in the blast.

The Iraqi Security Media Cell announced, in a statement, that convoys of transporting international coalition equipment withdrawn from Iraq by Iraqi transport companies and Iraqi citizens’ wheel drivers had exposed two explosive devices to detonate, according to Russian media.

The convoys of the International Coalition and the contracting companies have been attacked with improvised explosive devices throughout the last period in the capital and the governorates of central and southern Iraq, without government or security authorities revealing the perpetrators of these attacks or the results of their investigations.