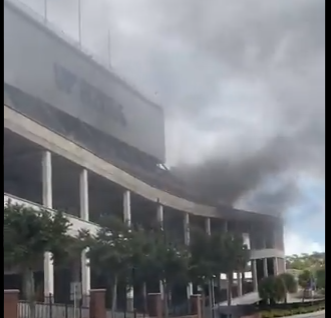 The Ben Hill Griffin Stadium in Gainesville, FL is currently on fire.

According to Yahoo reporter, Pete Thamel the fire in Ben Hill Griffin was caused by a golf cart that caught on fire. He also reported that the fire at the Swamp, University of Florida’s venerable football stadium has been put out.

WCJB reporter, Claudia Bellafatto also reported that GFR and University of Florida confirmed that there was a fire outbreak. According to her report, It was a dumpster fire on the 3rd level. At the moment on one was injured and the fire has been contained.

The firefighters were seen using ladders to get up there to figure out what’s going on.

The Ben Hill Griffin Stadium in Gainesville, FL is on fire. pic.twitter.com/krIVQ8xXrG