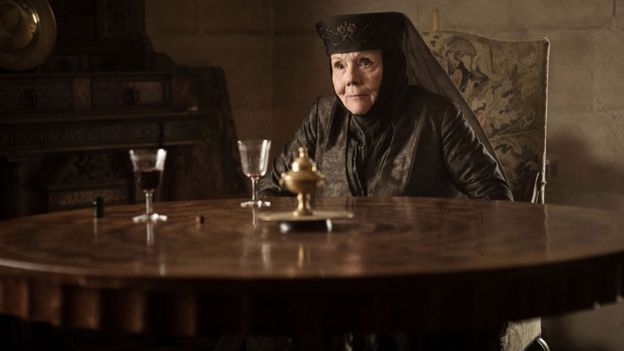 Diana Rigg one of the popular star actress on Game of thrones film has died at the age of 82.

The iconic actress is known for her roles in Game of Thrones, TV series The Avengers and James Bond film On Her Majesty’s Secret Service.

According to reports, “Diana died peacefully on Thursday morning. She was at home with her family who have asked for privacy at this difficult time,” her agent said.

Dame Diana is also known for playing Tracy, the only woman who became Mrs James Bond, in 1969 film On Her Majesty’s Secret Service.

She also appeared in ITV’s Victoria.

She played the Duchess of Buccleuch in the royal drama, and can currently be seen playing Mrs Pumphrey in Channel 5’s new adaptation of All Creatures Great and Small.

Diana has won the Tony and Emmy awards, She got into the world of television with her commanding turn as intelligence agent Emma Peel on “The Avengers” in the 1960s and played Lady Olenna Tyrell on “Game of Thrones” decades later, has died, BBC News reported Thursday. She was 82.

On “Game of Thrones” Rigg recurred as Olenna Tyrell, also known as the Queen of Thorns, beginning with the third season in 2013, and she was Emmy nominated for guest actress in a drama for her work on the show in 2013, 2014 and 2015.

In “The Avengers,” a British espionage series with sci-fi, fantasy and surreal elements that ran from 1961-69, Patrick Macnee starred as bowler hat-bedecked John Steed, who worked opposite various female agents over the course of the show, of which Rigg’s intelligent, witty and catsuit-wearing Mrs. Peel was by far the most memorable. The actress appeared in 51 episodes of the series from 1965-68, and was twice Emmy nominated for her work, in 1967 and 1968. In 2000 she shared a special Bafta Award with Honor Blackman, Joanna Lumley and Linda Thorson, who had all appeared opposite Macnee’s Steed in “The Avengers.” A feature adaptation of the series, starring Ralph Fiennes as Steed and Uma Thurman as Mrs. Peel, was released in 1998. Macnee died in June 2015.

Recently she also appeared in BSkyB and NBC’s “You, Me and the Apocalypse ” in 2016.

In between she won an Emmy for playing Mrs. Danvers in a TV adaptation of “Rebecca” in 1997. She also received an Emmy nomination in 1975 for lead actress in a special program for “In This House of Brede,” in which she played a London businesswoman who opts to become a nun, and in 2002 for supporting actress in a miniseries or movie for “Victoria & Albert.”

Rigg was also a noted stage actress in England who appeared on Broadway three times, starring in “Abelard and Heloise” in 1971 (her nude scene in the play and critic John Simon’s tart assessment of her body generated publicity); a revival of Moliere’s “The Misanthrope” in 1975; and a staging of “Medea” in 1994 — drawing a Tony nomination each time for best actress in a play and winning for “Medea.”

Reviewing “Medea,” the New York Times said, “Unlike Zoe Caldwell, who emphasized the sexuality of the character (and won a Tony Award in 1982 for her efforts), Ms. Rigg sees Medea as a woman of restless intellect. An orgiastic fervor informed Ms. Caldwell’s performance; she had a savage growl in her voice. A passionate sense of injustice propels Ms. Rigg, whose voice never entirely loses its intrinsic musicality.”

Rigg also made a number of notable appearances on the bigscreen. She played a significant role in the history of the James Bond film franchise by portraying, with great élan, Tracy Di Vicenzo, the woman whom Bond, played by George Lazenby, marries with great joy in 1969’s “On Her Majesty’s Secret Service,” only to see her murdered by the minions of arch villain Ernst Stavro Blofeld.

The actress also starred with George C. Scott in the Arthur Hiller-directed, Paddy Chayefsky-penned satire “The Hospital” (1971); the classic Vincent Price horror film “Theatre of Blood” (1973); the 1982 Agatha Christie adaptation “Evil Under the Sun,” in which she played the despised and thus dispatched Arlena Marshall; and most recently 2006’s “The Painted Veil,” in which she played the Mother Superior.