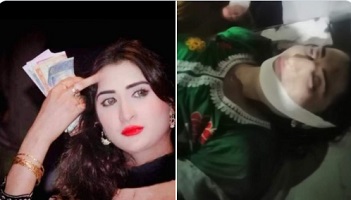 #JusticeforGulPanra – Transgender Activist Gul Panra has been shot dead in Peshawar. According to reports from sources, Gul Panra was shot six times at the point-blank range.

Transgender Gul Panra was shot and killed by Unknown gunmen while she was returning home with her friends last night in Peshawar.

GulPanra resident of Peshawar got shot brutally for six times while rushing to hospital lost her life.

Police said they have started a probe into the murder.

Muhammad Ameer Hamza wrote – Transgender named Gul panra from Peshawar was shot dead. She was shot 6 times. Is it the Islamic Republic of Pakistan? Transgender are not animals. Please for God sakeFolded hands don’t spread false news, the murdered Gul Panra wasn’t a singer but a transgender activist.

Syed Kashan Wrote – The single most instinctive evil is discrimination! A transgender woman, Gul Panra shot dead in Peshawar Broken heart. She was shot six times at the point-black range!!.

Zeeshan Gujjar wrote – Sad to confirm the death of a Trans Gul Panra. Who was also Guru of board member Mahi? She is shot dead 6 times in Pelosi area of Peshawar. AAKHIR KBB TK??.

Tahreem wrote – What is actually happening in Pakistan. A Transgender activist Gul Panra has been shot dead in Peshawar. I think Pakistan is no more safe for anybody. #JusticeforGulPanra

I highly advise that there is somewhat disturbing stuff in the hashtag and I wish people would stop circulating that image seeing it’s deeply triggering. I’m just sad. this country’s a sick excuse, protect your trans siblings. they’re a bigger risk here. they need you.