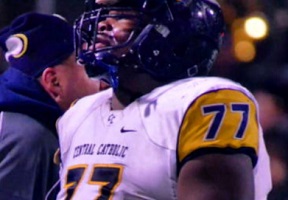 Jamain Stephens Death – Dead: Cal U Senior Football Player, Jamain Stephens has died. Jamain was reported to have died today. His cause of death or what killed him has not been made public.

Jamain Stephens was a business administration major and a senior on the football team.

Journalist Shannon Perrine also confirmed that Jamain Stephens has passed on. In a series of tweets, she wrote – Cal U of PA Senior football player Jamain Stephens has died. The university confirms the news to #WTAE Stephens played at Central Catholic – his family and teammates in mourning.

“Jamain was such a wonderful student with a smile on his face every time you saw him,” said Athletic Director Dr Karen Hjerpe. “His personality was contagious and he made such a positive impact on everyone he met.”

Members of the Counseling Center are available to provide support to Cal U students. Please contact the Student Health Center at (724) 938-4232 and the centre will work with counsellors to schedule sessions.

Eric Anderson wrote – “You can’t let these haters get to you Lil bro, you gotta stay solid, you gotta stay nice and strong so when they try hitting you with that bull Pile of poo, you ain’t going to fall down you gon be rock solid, you do that and nothing will break you or stop you”- Jamain Stephens.

Jack O’Toole wrote – just want my central brothers to know I love all of you. the past few days have taken a lot from us. long live Jamain Stephens and Terrell Pollard. BROTHERS FOR LIFE AND BEYOND.

The ESU Warriors has also reacted to the death of Jamain Stephens. In a series of tweets, they wrote – Please keep the family and friends of Jamain Stephens in your thoughts. ESU joins calvulcans in mourning the loss of a senior football player for the Vulcans.

Few Things You Need To Know About Jamain Stephens

Jamain Stephens played at Central Catholic under head coach Terry Totten. He was named second-team all-conference as a defensive lineman as a senior.

He served as a mentor with Brothers and Sisters Emerging and Ozanam Basketball Program.