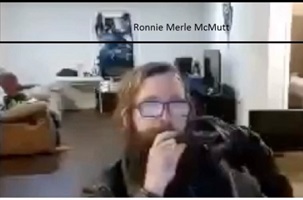 Who Is Ronnie McNutt? Man Who Shot & Killed Himself On Tiktok Live 2020, – Biography Of Twitch Streamer Shoots Himself

Ronny Roberts Mitchell Mcnutt – Man commits suicide to live on TikTok. The guy shooting himself on Tiktok live has been identified as Ronnie McNutt. The video of the man killing himself on TikTok has gone viral all over the video-sharing app.

We earlier reported that Ronnie Mcnutt who is twitch streamer took his own life over the weekend by shooting his himself in the head and live-streamed the whole scene on Facebook.

Who Is Ronnie McNutt (Biography)

Ronnie McNutt is a 33-year-old Iraq War Veteran who took his own life on August 31st 2020. The Mississippi man committed suicide and live-streamed it on Facebook the suicide video has been shared multiple times on Tiktok.

His church, the non-denominational Celebration Church in Tupelo, Mississippi, first confirmed that Ronnie has passed on tragically. Read as posted by the church on September 1, “In the midst of a sudden tragedy that occurred last night, we grieve with the McNutt Family during this time because passing of our brother in Christ, Ronnie McNutt.”

Ronnie McNutt was born on May 23, 1987. His bio on Facebook says he was a former account manager at GardaWorld. He began working at GardaWorld on April 27, 2012 and exited from the company on October 25 2019. He committed the suicide at his home in New Albany, Mississipi.

Ronnie McNutt who was a member of Celebration Church Tupelo, Worked at a Toyota plant in Blue spings, New Albany.

Why Did Ronnie McNutt Shot Himself

Ronnie McNutt’s death has recently been under the public eye after he live-streamed his suicide on Facebook Live. Multiple sources have revealed the reasons why Ronnie Mcnutt killed himself. According to them, Ronnie pulled the trigger after he lost his job and his girlfriend.

Multiple Request For Deletion Of The Video

Ronnie McNutt friends are requesting that the gory should be removed from the internet and whoever downloaded it should as well delete it from their phone. The video going around showed the man, Ronnie Mcnutt, shooting himself with a shotgun to the head on a Facebook live.

One of Ronnie’s friend, Alex Tangeman who also pleaded that the video be removed from social media described what Ronnie did as traumatizing. He revealed that the suicide video was watched by over 200 including Ronnie McNutt’s mother.

In a series of tweets, he wrote – Read Below:-

Ok, whoever’s passing around the video of Ronnie McNutt’s suicide needs to knock it the fuck off. That man was my friend and what he did on that Livestream was beyond traumatizing for myself and 200 other people – his mother included – who watched it happen live.

I know it’s being passed around because there was zero public chatter about it until today. And now his name is everywhere. If you downloaded the video, do the right thing and delete it. Nobody needs to see that. If you’re sending it to people, you are sick beyond comprehension.

Ronnie McNutt is currently not married. He is born to the family of Cecil Ronald and Elaine McNutt. Ronnie McNutt lost his father in 2019 (Cause Of Death Unknown). He has a brother, Joey and younger sister, Mindy. The video of Ronnie Speaking at his Father’s funeral which was uploaded on March 27, 2019, has gotten thousands of views on Youtube and a whole lots of comments.

A GoFundMe account has been created for Ronnie McNutt. The Gofundme account for Ronnie states the reason for setting up the account is to process the speedy removal of the tragic video from the internet.

It reads – As you may, or may have not seen, his videos are being exposed everywhere & although they’re being removed, it’s still available & by donating it will help speed up the process to ensure nobody sees such a harsh death sentence.