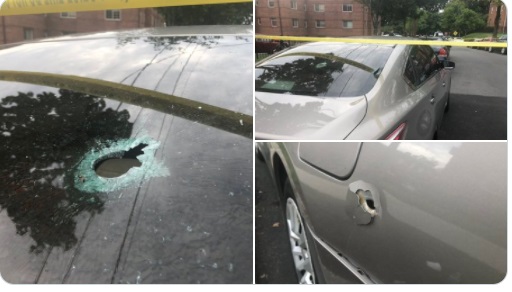 There is the latest report of a car driving by and shooting at Police Officers in DC.

According to Heather Graf working with ABC7 revealed that there is more from the DC Police Department shooting scene on Orange Street SE — I just spoke to the owner of this car, which looks like it was hit by several bullets.

More from the @DCPoliceDept shooting scene on Orange Street SE — I just spoke to the owner of this car, which looks like it was hit by several bullets.
She wasn’t home or in her car when the shooting happened, tells me she’s okay. pic.twitter.com/ntXHbX0cBj

Heather  went further to reveal that the woman wasn’t home or in her car when the shooting happened, “tells me she’s okay.”

Similarly, a man was shot and killed by a police officer on Orange Street SE in D.C. Wednesday afternoon.

“Uniformed police officers had information that there were guys in the neighbourhood with guns, specifically,” Newsham said in a press conference. “That’s what they were looking for and evidently that’s what they found.”

Multiple guns were recovered at the scene, according to investigators. Newsham says the man who was shot was believed to be in possession of one of them.

Newsham said it is unclear if this incident was at all connected to another, earlier incident in which someone fired from inside a car at a group of police officers on South Capitol Street SW.

A woman could be heard at the press conference saying that the man who was killed was 17 years old. Police have not identified the victim or given an age, however.

Ward 8 Councilmember Trayon White spoke after Newsham and said the victim was African American, “young,” and lives just about two blocks away from the scene.

White said some in the community told him the man was shot in the back, which “don’t sit well with me,” he said. But he reminded the crowd listening to the conference that most of the information is preliminary and unconfirmed.

He said he will request body camera footage to get all the facts.

FFDC is issuing an urgent call to action regarding another MPD related shooting in S.E. DC! 🚨🚨🚨. Please mobilize with us. MPD will no longer control the narrative. #stayreadysoyoudonthavetogetready pic.twitter.com/k2SC3BrrGI