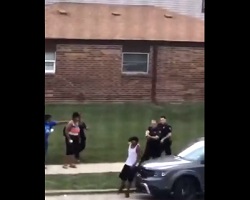 The man who was shot eight times at the back by the Kenosha police Sunday evening, has been identified as Jacob Blake.

Jacob Blake is reportedly in serious condition at Froedtert Hospital in Milwaukee as of early Monday morning following the shooting yesterday.

The Wisconsin Department of Justice’s Division of Criminal Investigation said early Monday that the involved officers have been placed on administrative leave.

Police had been called to a domestic incident in the 2800 block of 40th Street at 5:11 p.m. where the shooting later occurred.

Officers provided immediate aid to the shooting victim, Kenosha police reported, and he was taken by Flight for Life to Froedtert.

Sad. Jacob Blake looks like he could have been grabing a gun. He wouldn’t have got himself shot if he had just followed the cops’ reasonable instructions in Kenosha WI. pic.twitter.com/rkYxJr0Pkp

Jacob Blake, the man shot by police in Kenosha, Wisc., has a history of assaulting police. He also has past charges for domestic abuse & a sex crime.

Jacob Blake resisting arrest causing a soft tissue injury to a police officer and one misdemeanor count each of carrying a concealed weapon, carrying a firearm while intoxicated, endangering safety-use of a dangerous weapon, and disorderly conduct.

According to the criminal complaint, Blake and two women were at the Brass Monkey tavern, 1436 Junction Avenue, Saturday when Blake got into an argument with another patron and pulled a black handgun. Blake pointed the gun at the other man, and the magazine fell to the floor. The bartender told Blake to leave, and he did but then pointed the gun through the window at patrons inside the bar before walking south on Junction Avenue.

Police say they encountered a woman walking on Junction who was in the bar with Blake, but she said she didn’t know what happened and that her friends left without her in a silver SUV. A few moments later, officers were advised that a silver SUV was traveling north on Junction with a male subject driving who matched the description of Blake, and they initiated a traffic stop in the 1200 block of Racine Avenue.

Believing the driver was armed, police conducted a high risk traffic stop, the complaint reads, and ordered Blake to put his hands out the window of the vehicle. Instead, Blake exited the SUV and started walking toward officers and ignored commands to get down on the ground. Officers forced Blake to the ground and ordered him to put his hands behind his back. When Blake refused to comply, K9 Dozer was deployed to force the defendant into compliance.

While police were at the hospital with Blake so he could be treated for the wound he obtained from K9 Dozer, officers say he refused to answer questions, but he did submit to a legal blood draw to determine his level of intoxication.

Following the shooting of a black man in Kenosha large crowds soon trooped into the street at the scene of the shooting demanding for Justice. A livestream from podcaster Koerri Elijah showed small fires in the street and a person, possibly an officer, lying prone on the ground, surrounded by officers.

“Things have been very heated, tons of damage to cop cars, an officer was actually knocked out,” the person taking video said.

A crowd of about 100 had reached the Kenosha County Public Safety Building by 10:15 p.m. and were chanting “no justice, no peace.”