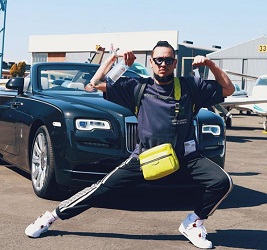 No Shot!! Controversial South African rapper AKA few minutes ago made a shocking statement via his twitter handle. AKA declared himself the “Greatest South African Hip Hop Artist Of All Time, Dead or Alive.

The rapper made this statement today in a series of tweets. His tweets reads.. I AM THE GREATEST SA HIP HOP ARTIST OF ALL TIME. DEAD OR ALIVE.

AKA’s greatest of all time comment has reached a thousand retweets on twitter, Tweeps are hitting back on him for making such comment while others are giving applauds that he deserves it. The star who has been very active on twitter today made this known not quite long.

Earlier today, AKA revealed the title of the music he’s been working on for months.

The Supa Mega reveals the project to be Bhovamania EP.

You can remove SA from your sentence and I’ll still agree with you. pic.twitter.com/ogE7BmPCk5

Why are u saying this? And what makes u think that?? pic.twitter.com/06RVMwvynB

now let’s wait for that mama’s baby to write a novel as a reply to this tweet.💀 pic.twitter.com/Idg39GteAS