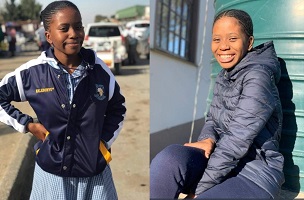 Eastern Cape police says they are investigating the murder of a 20-year-old Wits University student identified as Kwasa Zozo Lugalo who was allegedly stabbed to death by her boyfriend.

The hashtag #JusticeforKwasa is trending after details emerged of how Kwasa Zozo Lugalo, a student at Wits University, attempted to leave the abusive relationship shortly before her death.

According to the police’s Tembinkosi Kinana, a 23-year-old suspect is being investigated for Kwasa’s death.

Kinana says, “The suspect is alleged to have attempted suicide immediately after committing this particular crime is currently admitted in hospital. Once he is discharged the police will charge him with murder.”

Wits University has also reacted to the death of Kwasa Lugalo. In an official statement today, the WIT university stated that women are not protected in the country.

Read The Full Statement Below:-

Kwasa Zozo Lugalo, a determined & driven young women, was murdered by a man she chose not to have a relationship with. This fatal incident follows the brutal murder of Uyinene one year on. South Africa finds itself once again outraged at the senseless and violent murder of a young woman and student.

It is no longer enough for government to tell us that they are putting together teams to evaluate the problem and come up with solutions. The problem is clear. Women are being murdered in shocking numbers by men in South Africa. Women live in fear of being murdered in their homes, workplaces, schools, universities, family homes, post offices, velds, parks, vineyards, holiday destinations and streets.

📢 STATEMENT: Kwasa Zozo Lugalo, a determined & driven young women, was murdered by a man she chose not to have a relationship with. Women are being murdered in shocking numbers by men in SA.We are tired of mourning the loss of the lives of women. Rest in peace. #JusticeForKwasa pic.twitter.com/IkvMN5MCVy

The problem is that when women go to police stations to report their abuse they are told it is a domestic issue that should be dealt with by the family; that the perpetrator will calm down or that they should come back the next day as the person to report to is not available. The problem is that communities and families protect perpetrators and sent their victims back to them. The problem is that we turned these men into magical creatures. The men who beat, rape and kill women in South Africa are not monsters. They are men. They are our partners, our fathers and brothers. They are no more magical or fantastical than a bank robber or a theif. They are not possessed or acting out of character. They are human beings who live among us, capable of independent thought, capable of being held accountable for their actions.

The solution is simple. Government must implement existing legislation to hold these murderers, rapist and abusers accountable. Schools must create effective curricula that speak to gender equity and diversity.

Women are tired of being responsible for not being abused! Women are tired of marching and demanding to be treated as aequal citizens in South Africa who are afforded the same freedoms are men. Kwasa’s murderer was sober when he took her life. He had threatened her that he would take her life if she left him. His family asked her to stay for her own safety. The solution is that we must realize that the men who abuse and murder women are men we know and men we protect by denying the existence of their violent behavior. There has been enough talk of what real men do or do not do. The reality is that men are killing women for sport in South Africa, It is time that the South African government take responsibility for its citizens – both abused and abuser. Implement the many laws created to protect individuals, hold to account those who fail to do their jobs and fire those whose actions or inaction leads to the death of those who are abused. We are tired of mourning the loss of the lives of women across South Africa.

Thank you for being enough to leave, Kwasa. We are sorry that you were not protected when you made the choice. Rest in peace.