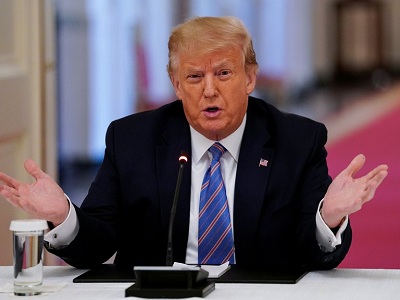 President Trump on Thursday has revealed that Israel and the United Arab Emirates have entered into a “historic peace agreement” that will establish full diplomatic ties between the two countries, with Israel reportedly agreeing to stop its annexation of the West Bank, territory that Palestinians have sought for their future state.

While speaking with the media from his Oval office, President Trump made this known with the senior advisor Jared Kushner and
A joint statement by Trump, Israeli Prime Minister Benjamin Netanyahu and Abu Dhabi Crown Prince Mohammed bin Zayed said they hope the “historic breakthrough will advance peace in the Middle East.”

“Now that the ice has been broken I expect more Arab and Muslim countries will follow the United Arab Emirates,” Trump said from the Oval Office Thursday.

The Washington Post reported that the UAE is the first Gulf Arab state to achieve diplomatic ties with Israel, and the third Middle Eastern country to have done so, following Egypt and Jordan.

For the UAE, the agreement helps promote its reputation as a tolerant country despite being ruled by autocrats, and gives it more recognition amongst the Gulf Arab states, according to the Post.