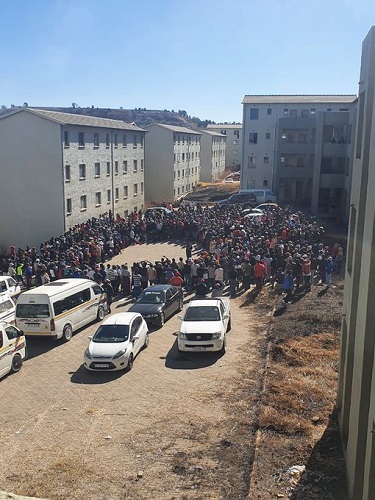 A body has been found near the government housing project in Fleurhof in Roodepoort where the Red Ants are currently evicting people.
Malungelob from Newzroom Afrika reports.

[UPDATE] A body has been found near the government housing project in Fleurhof in Roodepoort where the Red Ants are currently evicting people. @malungelob reports.

Tune into #Newzroom405 for this developing story. pic.twitter.com/77AYWtDdvZ

It is set to be one of the largest integrated housing developments in Gauteng and included in the Premier’s Mega projects pronounced during April 2015. The 440 ha (usable) land area of Fleurhof comprises various types of residential units and forms of tenure that have specific economic target markets: Fully subsidized BNG housing, GAP (Social, FLISP & open market rental) and open market bonded housing.

Included within the 440 Ha of land is a mine dump in the process of being cleared which will result, once all environmental requirements have been met, in yielding an additional 5 000 residential units to be developed within the near future. The Fleurhof project, on completion, will provide housing for an estimated 83 000 people.

With the information gathered so far, the occupants have been getting an eviction orders.

There has been so many people saying that the government has requested that they refrain from evicting people until the end of state of emergency. Who is to blamed? the judiciary corrupt?

It’s understood the South African National Defence Force (SANDF) were also been sent in for reinforcement.

Johannesburg metro police spokesperson Wayne Minnaar says the residents will have to find their own alternative accommodation.

“At least 2000 individuals had to be evicted from Fleurhof flats for having occupied the flats illegally.

“The finding of alternative accommodation will not apply in this instance because the eviction was done after the immediate occupation.”

Rubber bullets were also used to disperse some gathering groups.

Similar evictions have taken place in other parts of Gauteng, as well as Cape Town where law enforcement officials demolished illegally-built shacks in Khayelitsha.

Previously, government has urged officials to exercise caution when evicting anyone during the Covid-19 lockdown.