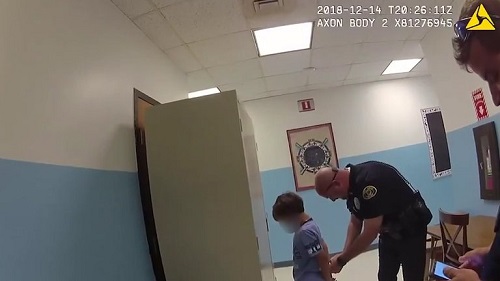 Despite the rejection that caused the event, the Key West police defended the behavior of the officers.

The event occurred in December 2018, but it went viral in the last hours. A shocking video shows the arrest of a boy as young as 8 years old in a school in Key West, in the state of Florida. The reason: to have hit a teacher. Within hours, the images sparked outrage from users on social media after Tallahassee attorney Ben Crump, who represents the families of George Floyd, Breonna Taylor and Ahmaud Arbery, shared the video of the arrest on Monday.

“Amazing! Police used the ‘scared straight’ tactic on an 8-year-old boy with special needs. He is 3.5 feet tall and weighs 64 pounds, but they thought it appropriate to handcuff him and send him to an adult prison for processing !! He was so small that the handcuffs fell off his wrists! ” Crump wrote, sharing the body camera footage of one of the police officers.

“Scared straight” is a strategy used to deter juvenile offenders by briefly placing them in adult prisons to expose them to the harsh reality of incarceration.

Although in this case the child was not sent to an adult prison, they did try to put the handcuffs on him and they were transferred to a police station. In addition to that, throughout the operation they repeated the same phrase:”You are going to jail.”

In the video you can see the moment when he is requisitioned by the police and then taken to a patrol car.

First the officers order him to stand against a closet. One of them searches him, and when confirming that he was not wearing any item in his clothes, he tells him to place his hands behind his back. The boy, visibly scared, looks down at all times complying with the orders of the policemen, and groans and cries. After several attempts they are unable to put the handcuffs on him, as they are too big for his hands.

A teacher approached him to comfort him as he was escorted out of the school. “Understand that this is very serious and that I hate that you put me in this position and that I have to do this. What happens is that you made a mistake and you have to learn from it and grow with it and not repeat the same mistake again ” , one of the officials told him. The boy, whose identity was not revealed because he was a minor, only managed to nod his head.

The boy was booked into a juvenile justice center in Key West for a felony assault, the arrest report indicates.

The report details that during a class the teacher asked him several times to sit up well. He refused and said, “Don’t put your hands on me.” Given that response, the teacher told him to walk with her, and he replied: “My mother is going to hit you.” He then struck her with his right hand on the chest.

Officer Michael Malgrat wrote in the report that he was in the school’s administrative office when the teacher and the boy arrived and the minor “had his hands clenched as if he were ready to fight.”

Despite the rejection and rejection that the images generated, on Monday Key West Police Chief Sean T. Brandenburg said his officers did nothing wrong: “According to the report, standard operating procedures were followed.”

“The police should not have any role in punishing our children or in carrying out traumatic maneuvers like this in our schools,” said the former mayor of San Antonio, Julian Castro, who added to the rejection of what happened.