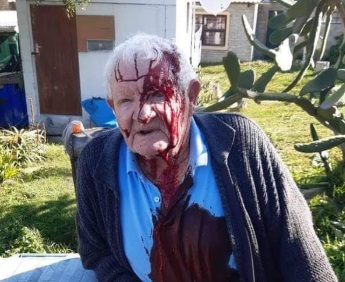 A viral video making rounds all over the internet show the shocking moment an old man who was walking on his own in Vermont Hermanus was brutally attacked for no reason.

The video showed the man bleeding profusely after the attack as the WC provincial medics helped to curtail the bleeding. According to reports from sources, the aged man was attacked by two young girls.

In the video above the man who caught them was heard saying: ‘Die manne wat ek gevang het’.

Old man walking in his own in Vermont Hermanus brutally attacked for no reason pic.twitter.com/DRlVotKB52