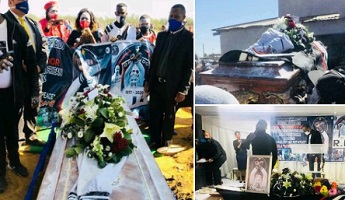 ‘Mgijimi’ Sindane was reported to have died at his home on Tuesday afternoon. He was found at his place by his father at his residence in Witbank.

Mgijimi laid to rest today in Witbank. Friends, relatives and Orlando Pirates supporters trooped in to pay their last respect for the deceased.

No one will criticize the mgijimi’s funeral because PSL teams are not Politically affiliated.

More than 50 EFF members at #mgijimi funeral… If it was ANC pic.twitter.com/k9GnqQzxAb

No one will criticize the mgijimi’s funeral because PSL teams are not Politically affiliated pic.twitter.com/Ah2ioD76eg