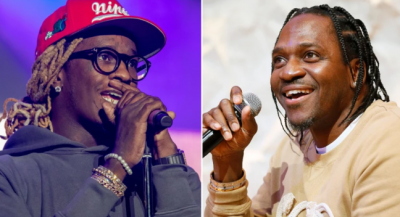 Pusha-T has spine off a new whirlwind of fire on the social media after he dissed Young Thug over the leaked Pop Smoke song.

Pusha’s feud with Drake was on a verse of an unreleased Pop Smoke’s track “Paranoia.”

Pop Smoke song titled “Paranoia” which was an unreleased song was actually leaked on Monday. The song featured Young Thug, Gunna, and Pusha-T, who used his verse to dive back into his long-standing feud with Drake.

Read His Full Reply To Young Thug Below..

“Those empty threats only sound good on your records/If the patois is not followed by a Blocka,” raps Pusha-T on “Paranoia.” The song was expected to be on the deluxe edition of Pop Smoke’s Shoot For The Stars, Aim For The Moon, but after his response to Young Thug’s criticism of the verse, it looks like that is no longer the case.

Following Thugger’s statement that he does not respect the way Push came at Drake on the record, the Virginia native fired back.

“Aye @youngthug couple things: 1. Don’t feel bad, NOBODY knew what the verse was abt. The label heads that stopped it didn’t even know. They only ASSUME because HE TOLD them! The same way HE TOLD abt the Ross ‘Maybach 6’ verse,” said Push, suggesting that Drake is a snitch. “And if HE’LL TELL record executives abt rap verses, God only knows what else HE’LL TELL! I don’t deal in Police Work, Police Rappers, or Police N***as.”

He then went on to speak directly about the song.

“2. @youngthug you were the last verse added to the song and that’s ONLY because I requested YOU,” he added. “And most important @youngthug, just so we are clear… I WOULD NEVER look or need YOUR respect for what it is I bring to this rap game.”

Finally, Pusha-T demanded his verse be removed from the deluxe edition of Pop Smoke’s posthumous album.

“@stevenvictor I demand you take me off the deluxe @realpopsmoke album to avoid any confusion that may take away from This amazing body of work,” concluded Push.