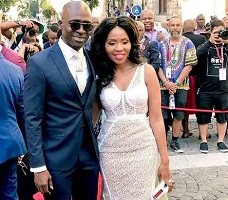 Norma Gigaba, the wife of former finance minister Malusi Gigaba, has been arrested. She is being detained at the Brooklyn Police Station in Pretoria for allegedly damaging a Mercedes Benz G-Wagon belonging to her husband.

The marital issue between Malusi Gigaba has gone really wide. This evening around 6:pm on Friday Pretoria police arrested Norma Mngoma Gigaba, wife of former finance minister Malusi Gigaba after she was charged with malicious damage to property and crimen injuria. Norma is currently being detained at the Brooklyn Police Station in Pretoria.

Sources known to Independent Media stated Gigaba was under investigation for damaging a Mercedes Benz G-Wagon. The car is believed to belong to her husband.

A woman only known as Sibongile described the situation as ‘extremely tense’.

It is reported that a war of words has broken out between the police and a friend of Mngoma, believed to be a prosecutor.

Independent Media identified a member of the family arriving at the police station in a white 4-series BMW.

So Melusi Gigaba choose his G wagon over Norma Gigaba? Wow! Ladies normalize leaving a toxic relationship before you lose yourself. G wagon is in the garage while Norma sings zumbapeperee!! pic.twitter.com/bVfiJrPoVf

Instead of going after Norma Gigaba, the Hawks should get busy with R500bn misuse and arrest everyone who’s responsible. I’m sure Malusi Gigaba can gladly deal with his wife

Karma is a bitch “Mapipi” is doing what he did to he’s first wife before he married Norma Gigaba.. There’s no forever after.. pic.twitter.com/eTsGvEaVOH