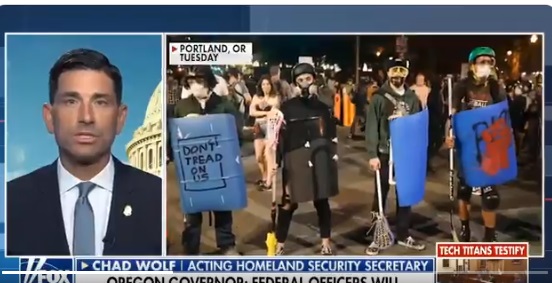 Acting Homeland Security Secretary, Chad Wolf has revealed on an interview with the FOX News that the DHS will not reduce our presence in Portland.

He said this will remain until they are assured the federal courthouse is secure and that the agreed-upon partnership plan with the State of Oregon is successful over time.

DHS will not reduce our presence in Portland until we are assured the federal courthouse is secure and that the agreed-upon partnership plan with the State of Oregon is successful over time.

But we need to make sure of that first. pic.twitter.com/UnsxkPT0Fm

Meanwhile it was iniatially announced in the last few hours that the homeland security and Oregon has reach deal to begin withdrawing federal agents from Portland.

According to Editio.cnn.com, The Trump administration has reached an agreement with Oregon’s Democratic governor to withdraw federal officers from downtown Portland, though the Department of Homeland Security says it will maintain a presence in the city until it believes federal locations there are secure.

The decision to send federal agents into Portland earlier this month escalated tensions in the city, which has seen prolonged and at times violent protests for the past two months over demands for racial justice and police accountability. President Donald Trump and acting Homeland Security Secretary Chad Wolf have said the federal officers were there to protect a federal courthouse in the city’s downtown that has been a focal point for protesters, but the officers have also clashed with demonstrators.
Wednesday’s agreement was announced separately by Gov. Kate Brown and Wolf, who offered different reports on the conditions for the agents’ withdrawal.