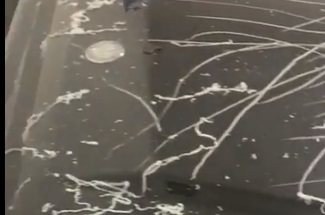 Something is really not right with Malusi Gigaba and his wife Norma. The former minister and his wife may be on the verge of splitting their marriage.

A video which surfaced online showed how Malusi’s wife, Norma allegedly scratched his G Wagon car and breaking the side mirror.

The two love birds from the look of this things may be going through some serious marital crises as both have removed pictures of the two of them together few day ago and shockingly today 26 July 2020 Malusi woke up to find his car badly damaged.

As shared on twitter “Apparently this is Melusi Gigaba’s car the wife did this to his G Wagon.”

Apparently this is Melusi Gigaba’s car the wife did this to his G Wagon. pic.twitter.com/aLC7GopnCX

Malusi divorced his first wife, Thabong, to marry Noma in 2015. Norma was born on 9 April 1975, she married Home Affairs Minister Malusi Gigaba in 2014. The pair have two sons named Nkanyezi and Mvelo, and she even has a famous sister in singer Nandi Mngoma.

She has made a name for herself as an IT guru and specialist. She has worked with technology all of her life – earning the nickname Mrs Gigabyte – and takes particular offense to being labelled as a “trophy wife”.

Her marriage to Malusi has been turbulent, to say the least. In the same year they wed, Malusi admitted to having an affair with New York-based fashion stylist Buhle Mkhize. A bitter war of words has ensued between the pair, with Gigaba labelling her love rival as a “prost_itute” and “obsessive”.