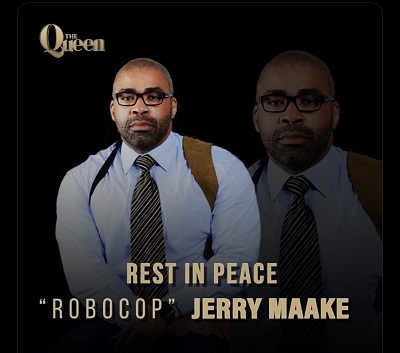 The Queen Mzansi this scene bathong, it really got me emotional do you know why?, Jerry is leaving the telenova tv show.

For the fans and lovers of The Queen Mzansi It’s has really been a four seasons of greatness and our national treasure Jerry Maake has remained the image of all that is good and true in the world of drugs and dirty cops.

Jerry Maake bathong such a good character a cop with love was shot dead and  that marks the end of Jerry on The Queen Mzasi. We always laugh when he talks to Thato and that Setswana accent but finally he is leaving the South African telenovela. yeah such things do happened in the really life and it always hurt when it happened, losing our favourite ones especially the ones love and cherish is always the hardest aspect of ones life.

#TheQueenMzansi this scene bathong, it really got me emotional, Jerry Maake bathong such a good character. I always laugh when he talks to Thato and that Setswana accent pic.twitter.com/eFqIbpCzXN

It’s so hard to say goodbye to this community stalwart and it comes as no surprise that his last living act was saving a life.

The Queen is a South African telenovela that premiered on Mzansi Magic on August 1 2016 and on canal plus in April 2020.

It is produced by Ferguson Films, owned by acting veterans Connie Ferguson and her husband Shona Ferguson, who also play two of the main roles in the series. The Queen is currently in season 4 with season 5 airing in July 2020.

Bathong that was the best action ever I loved it modzimo🙆‍♀️. The queen never seize to amaze me. But we lost the best actor too,Jerry Maake. Hope he will come back again. The queen please don’t leave,o bozza tlheng.