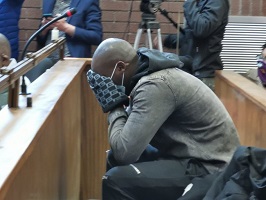 Tshegofatso Pule murder case has been postponed to 29 September for DNA results and further investigation. Muzikayise Malephane who is accused of killing 28-year-old Pule remains in custody.

The 31-year-old Muzikayise Malephane appeared in court today to face premeditated murder charges for Pule’s death who was found hanging from a tree in Durban Deep in Roodepoort with multiple stab wounds last month.

Prosecutor Musa Makhubele asked for a postponement, he says there is still some evidence that is outstanding, which include DNA.

Malphane’s lawyer has asked the court if there are any suspects who have been arrested other than his client. The State indicates that no one else has been arrested but say investigations continue.