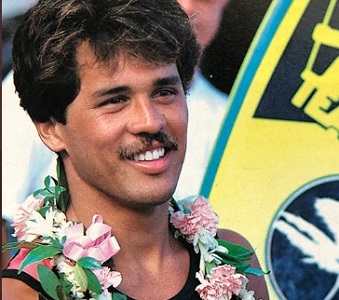 Popular Chinese Hawaiian surfer who won the world surfing championship in 1993, Derek Ho has passed away. Derek Ho died today July 18 2020. His cause of death or what killed is not yet known. The World Champ And Pipeline Master also known as “Uncle D” was earlier reported to be critically ill and was hospitalized.

Sources reported that Uncle Derek was in a coma, though the circumstances around his hospitalization were not known.

Uncle Derek has remained one of surfing’s most widely, internationally beloved figures, as well as a Pipe standout into his mid-50s.

Legend never die 😔💔 RIP uncle D. Real soldier of the good vibes. Soldier of the sea. Love you guys. I will remember this vibe always pic.twitter.com/M3kbVai8ML

Pro Flores echoes posts on Facebook that Hawiian surfing legend Derek Ho has passed after reports he was hospitalized in a coma for reasons not divulged. His family, including brother Michael, is surf royalty. In ‘93 he became the first Hawaiian man to take the world title. https://t.co/xgctCG2x22

Few Things You Need To Know About Derek Ho

Derek Ho was born in Kailua, Hawaii. He began surfing at the age of three, and won the world title at age 29, making him the first Native Hawaiian world champion. Derek Ho is the brother of Michael Ho, another champion surfer, and the first cousin of Don Ho, the Hawaiian singer. He is the uncle of professional surfers Mason Ho and Coco Ho.

Derek Kaleiki Ho was born in Kailua on Oahu to Chico and Joeine Ho, first cousin to Don Ho. Chico was one of the original Waikiki beach boys, so there was no question his offspring would surf. His older brother Michael was among the first wave of professionals in the mid-’70s, finishing in the Top 16 for 10 straight years.

Derek began surfing at age three and became a fixture at wind-whipped Sandy Beach before graduating to the better spots along the South Shore. While Michael Ho was serious about competition, Derek showed promise, but instead found trouble with a rough crew from Kailua High School. He often landed in police custody for petty thievery and reached a crossroad when placed in a correctional center at age 18. It was either find direction or go to prison.

North Shore godfather Brian Suratt intervened and got Derek to Japan for the 1982 Marui Open. Derek made the semifinals and found his calling — to bring the professional world title to Hawaii.

On his first full season, Ho made the top 30, earning a main event seed. He shone in all conditions, winning events over the next several years in tiny Japanese dribblers and monstrous Pipe cylinders.

In 1985, he joined Michael in the Top 16, the first siblings ever to do so. His mastery at the Gotcha Pro, held at his familiar Sandy Beach, wasn’t even fair to the other surfers. At Pipeline, he assumed Gerry Lopez’s lofty mantle, claiming three Pipe Masters titles and any wave he wanted. He was runner-up to Martin Potter for the world title in 1989 and finished fourth two other years.

By 1993, his career seemed to be winding down. Kelly Slater had arrived on the scene, winning the previous world title and getting better still. Ho was 29 years old and seeded 36th — his lowest ranking since joining the tour. But during the season, he hung tough, not killing it, just staying consistent… Read Full Biography Here