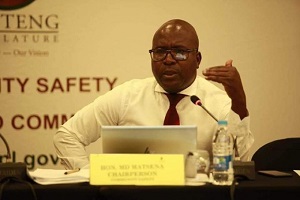 Chairperson of the Gauteng Legislature’s Portfolio Committee on Community Safety Mapiti Matsena has died. Reports from sources said Mapiti Matsena was stabbed to death in his house in Doornpoort, Tshwane.

Sources claimed that Mapiti has been fearing for his life for the past months because of Tshwane tender irregularities.

According to current information, the deceased went to the toilet when the suspect gained entry through the unlocked outside glassdoor. The suspect allegedly covered the deceased’s wife with a blanket.

Details surrounding his death remain sketchy at the moment.

I am really saddened by the news of the brutal death of cde Mapiti Matsena. This is one comrade who had high humanitarian skills. He knew every leader of all ANC branches and structures by their first name. Here the… https://t.co/oyzs2VW3DI

Breaking: One of the ANC Gauteng leaders Mapiti David Matsena found murdered.
He was allegedly stabbed to death in his home by an intruder/ burglar
Matsena was the GAUTENG PORTFOLIO COMMITTEE CHAIRPERSON FOR COMMUNITY SAFETY#sabcnews#ANC @TshwaneANC @GautengANC pic.twitter.com/80jxckHkEO

An ANC official from Pretoria Mapiti Matsena who was now chairperson of community safety in the Gauteng Legislator was murdered this morning at his home. Mapiti has been fearing for his life for the past months because of Tshwane tender irregularities. pic.twitter.com/jCEWHOYTgh

Matsena until his death was the chairperson of the community safety portfolio committee at the Gauteng legislature. He was 54 years of age.

The SAPS officers from Sinoville police station responded to the scene at about 22:52, according to a police statement.

“Upon arrival they found the deceased on the floor in the main bedroom. Paramedics were summoned and declared him dead after attempts to resuscitate him failed,”the police said.