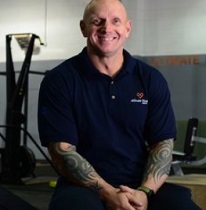 A man in his mid 50’s who is said to be a British boxer identified as Jonathan Bailey committed suicide and live-streamed it while hundreds of people watch on Facebook.

Jonathan Bailey popularly known by his boxing name as BAZZA was found dead at an address in Newcastle-under-Lyme after posting on his Facebook that he will kill himself.

The video which was later deleted by Facebook was watched by more than 400 people.

According to StokeonTrentLive Bazza was pronounced dead after paramedics were called to reports of a ‘medical emergency’ at an address on Larkspur Grove, in Newcastle-under-Lyme.

The social media giant Facebook has also reacted to the death of Jonathan Bazza who took his own life and live streamed it.

A Facebook company spokesman said: “Our thoughts go out to Mr Bailey’s family at this difficult time.

“We can confirm that the live-stream was deleted very soon after being posted and a further post has also now been removed at the family’s request.

“We take the responsibility of keeping people safe on our platforms seriously, and we will continue to work closely with experts like The Samaritans to ensure our policies continue to support those in need.”