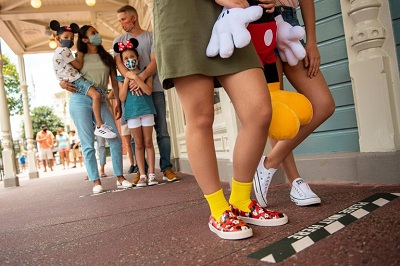 The state added 10,383 cases in one day. Miami-Dade, with more than 2 million inhabitants, continues to be the epicenter of the pandemic, with full hospital emergency rooms and low availability of beds in intensive care

The state of Florid a, the fourth in number of cases of COVID-19 in the United States, surpassed again this Saturday the 10,000 new confirmed by adding 10,383 in 24 hours, to reach the total of 254,511 infected people and 4,197 deaths of residents associated with the new coronavirus.

According to the state Department of Health, since Friday, 95 new deaths have been added , including 14 in Miami-Dade, 17 in Broward and 8 in Palm Beach, the three counties with the highest levels of infections and which are located in Southeast. Among them they added this Saturday 108,968 cases, 42.8% of the state total.

Miami-Dade, with more than 2 million inhabitants, continues to be the epicenter of the pandemic , with full hospital emergency rooms and low availability of beds in intensive care (ICU). This county, with a 13.2% availability of ICU beds, currently counts 60,868 cases of the SARS-CoV-2 coronavirus and 1,132 deaths since March 1.

In total, 2,477,810 coronavirus tests have been performed in Florida, which means that 10.3% of the tests have been positive. Currently, there are 18,023 state residents hospitalized, according to the same official source.

The record of daily cases is in the 11,458 new ones of last Saturday and as for the deaths, the day that there has been more was last Thursday, when they reached 120.

The Florida Department of Health announced Thursday the allocation of $ 138 million in federal funds to hire COVID-19 epidemiologists, nurses and contact trackers to cope with the rebound.

In Miami-Dade, measures have been taken that represent a setback in the reopening, such as an order that since Thursday prohibits restaurants from serving food inside the premises and only authorizes attention at tables outdoors.

Yesterday, a hundred restaurant owners and workers demonstrated in Downtown Miami against the measure, considering that the ordinance is discriminatory. However, under strict security measures and as part of the economic reopening, this Saturday they opened the doors of the Magic Kingdom and Animal Kingdom theme parks in Orlando (central Florida) to the general public.

Meanwhile, the doors of EPCOT and Disney Hollywood Studio will do the same next Wednesday following “a phased strategy” derived from the experience gained in the parks of Shanghai and Hong Kong.

Florida ranks fourth for COVID-19 infections in the United States, according to Johns Hopkins University, second only to the states of New York, California, and Texas. The country reached this Friday the figure of 3,173,446 confirmed cases of coronavirus and 133,969 deaths, according to the independent count of the same university .

With information from EFE