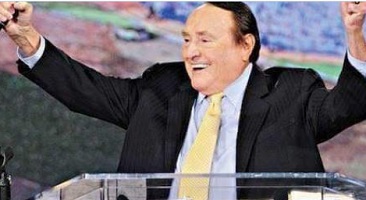 American Pentecostal evangelist who has traveled extensively around the world for his ministry, Morris Cerullo has passed away. Pastor Morris Cerullo died today July 11 2020. Morris hosts Victory Today, a daily television program, and has published more than 80 books.

His family had yesterday asked Christians all over the world to pray to Morris Cerullo.  Dr. Cerullo  is being treated for Pneumonia at the hospital, the family reported on Thursday July 9 2020.

Morris Cerullo cause is not yet known as at the time of filing this report.

MORRIS CERULLO HAS GONE TO BE WITH THE LORD AT 88

Our Father, Dr Morris Cerullo is gone to join the great cloud of witnesses after having fought a good fight and having run his course.
Let’s thank God for a great life and pray for his family at this time. pic.twitter.com/8wPwY2hQRm

Cerullo was born in Passaic, New Jersey to a Russo-Jewish/Italian family. His parents died in an automobile accident when he was very young. He was raised in various orphanages, the last being an Orthodox Jewish orphanage in nearby Clifton, New Jersey.

He converted to Christianity at age 14 with the guidance of a nurse in the Clifton, New Jersey, orphanage.

Soon after, Jewish orphanage directors restricted him from practicing certain matters of his new faith, so he ran away from the orphanage. He began preaching the gospel at the age of 16, after claiming to have seen a vision from God, in which he witnessed people suffering torments in Hell.

He attended and graduated from divinity school in New York state in 1953, and began ministering with the help of his then soon-to-be bride Theresa. In the early 1950s, he was ordained in the Assemblies of God.

Morris said, “God said, America needs to experience once more my supernatural power … just like I healed you, I want you to take My healing power to London – Los Angeles – Toronto – New York – and Washington, DC.” I must be faithful to the Lord! I am calling on believers everywhere to stand with me – to pray with me – mark these dates down for a great harvest of souls and make your plans to join me.” (To request complimentary commemorative tickets visit www.mcwe.com.)

Dr. Cerullo will be hosting special Pastor Prayer Breakfasts in each city to personally minister and share his heart for these final crusades to bless the pastors and churches of Los Angeles, Toronto, New York and Washington, DC. If you are a pastor or ministry leader, please call 817-554-2060 to confirm your attendance for the complimentary 10 a.m. Pastor Prayer Breakfast in Toronto (May 14th), Los Angeles (June 9th), New York (June 25th), and Washington, DC (July, 16th).

Many Christians in the Church are holding onto idols in their
hearts. Many have placed their families, careers, and pursuit of
worldly pleasures first place in their lives, instead of the Lord and
their worship of Him. These things have become their idols.

Respected Dr Morris cerullo I have great burden for my nation India, and I want to share the gospel of Jesus Christ to every man of India. Please pray for me so that Our God gave me young leaders to share the gospel with me in whole India and 2nd pray for funds . Thank you so muc

Jesus said, “Because I go to the Father, whatever you ask I will
do.” The disciples would be able to ask for and receive everything in
His Name and therefore, would do the greater works.

My father Dr Morris Cerullo @morris_cerullo is gone to join the great cloud of witnesses after having fought a good fight and having run his course. His legacy lives on in us. pic.twitter.com/w0Nf6v4fpe

For many years Morris Cerullo conducted repeated “Schools of Ministry” in several countries like Mexico, Brazil, The Philippines, Korea, Zimbabwe, South Africa, Kenya, Nigeria, Indonesia, Netherlands and many others. During these “SOMs” one of the days of the conferences he would preach in an open air crusade, or a large theater/arena, and lead people in a commitment to Jesus Christ and then would pray for healing to happen in the crowd.

Morris Cerullo was born in Passaic, New Jersey to a Russo-Jewish/Italian family. His parents died in an automobile accident when he was very young. He was raised in various orphanages, the last being an Orthodox Jewish orphanage in nearby Clifton, New Jersey. He converted to Christianity at age 14 with the guidance of a nurse in the Clifton, New Jersey, orphanage.