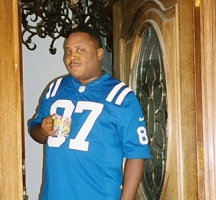 Jordan Alexander Groggs of Injury Reserve has passed away. Steppa J Groggs died in early hours of today July 1 2020. His cause of death is not yet known as at the time of filing in this report.

The Phoenix rap group Injury Reserve in a series of tweets made via their official twitter handle confirmed that the rap star has passed on. The tweet also go along with a GoFundMe for Groggs’ family, which elaborates, “Groggs’s heart has touched everyone he has came across. He will live on through his family, supporters, and the communities he was apart of. Jordan Alexander Groggs is survived by Anna and their four children Joey, Jayden, Toph, and Ari.” Groggs was 32.

The tweets reads below..

“REST IN POWER Jordan Alexander Groggs a loving father, life partner and friend.” They also shared No cause of death has been revealed.

Groggs, who rapped under the name Stepa J. Groggs, began collaborating with Injury Reserve’s Nathaniel Ritchie sometime circa 2012, when Groggs was working at a Vans store run by Ritchie’s mother.

As they bonded over music, Groggs became a mentor figure for Ritchie, who was still a teenager at the time. After producer Parker Corey came into the fold, they solidified into a trio with Groggs and Ritchie rapping over Corey’s increasingly futuristic beats.

The trio built up a following in Arizona’s DIY scene and the online rap underground, releasing a string of acclaimed mixtapes and EPs and eventually signing to Loma Vista for last year’s self-titled debut album. Their most recent release was a trio of standalone tracks early this year called “Hoodwinked” and “Waste Management,” and “Rock N Roll.”