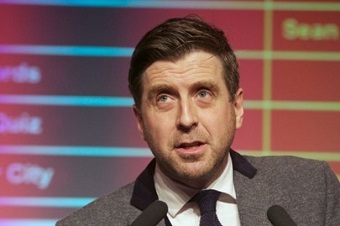 Mark’s wife Sara was reported to have passed away on Wednesday at the age of 44 after a long battle with an undisclosed illness.

According to the Sun, Sara had been suffering with a ‘long illness’.

“Mark and the kids are absolutely devastated.

“The family was there and it’s just a really sad situation.”

“They’re an extremely private family and would appreciate people respecting that.”

A spokesman also confirmed to the publication that Sara has passed away.

Mark, who is affectionately known as Chappers, currently presents Match of the Day 2 on BBC2 and often Final Score.

Mark Chapman began his career in 1996 as a continuity announcer on BBC Television, primarily working on BBC Two, before becoming the cricket correspondent for BBC North East radio.

So Awkward Actor, Archie Lyndhurst have passed away

Chapman then joined BBC Radio 1 as a sports reporter working on Sara Cox’s show and later on Scott Mills’s show, where he was nicknamed Chappers, before joining Radio 5 Live to host 5 live Sport on Monday evenings in 2010.