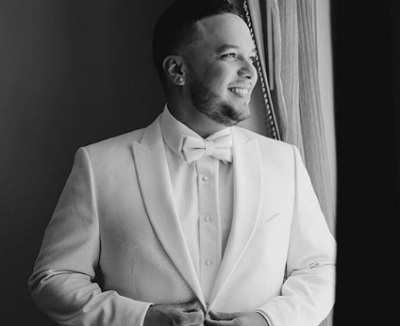 “My heart will always beat for you,” he wrote on social media in an exclusive heartfelt romantic massage he passed to his wife Rivera.

The media couple married on June 29, 2019 in California; However, for a few weeks they have been facing a marriage crisis that has kept them apart.

Despite this, Lorenzo published on his Instagram account a message written in English with a dedication to Janney Marín, the real name of Jenni Rivera’s daughter.

What year of growth, maturity, ups and downs … life is not perfect but your will. Love is the best gift. Although we are on hiatus, my heart will always beat for you and will always choose you as it did a year ago.
Méndez closed the publication to comments and accompanied the message with a black and white photo of his wedding day, in which he looked very smiling.

What a year of growth, maturity, ups and downs… life is not perfect but your will is. Love is the greatest gift. Though we are at a pause, my heart will forever keep beating for you and will always keep choosing you as it did a year ago 🤍

Chiquis also recalled the date through an Instagram post. She uploaded a photo wearing her veil and half-naked, covering herself only with a bouquet of flowers.

“6.29.2019: marks the day that God gave me the blessing of being a bride . #OneYear. Dear God, it has been a year of ups and downs. Some happy moments and others not so much. But, regardless of the facts, obstacles and setbacks, I still thank you for giving me the blessing of experiencing everything, “he wrote on the social network.

“Today, a year later, I am much wiser, stronger and full of love. Thank you! May your will continue to be done in my life. I trust you. -JM ”.

Rivera did not dedicate a single word to Méndez and both shared photos in which they do not appear as a couple.

For now, the future of both seems uncertain and it is that just before their first wedding anniversary, Chiquis blamed Méndez for their separation.

She wanted to respond to the people who were criticizing her by seeing how she was having fun with friends and without Lorenzo in sight, then she noted:

He showed his desire not to give more details of his private life and accepted that he is having fun because he does not like to lie.

“I am having a lot of fun. That is the difference with other people who pretend and hide reality, not me, I am drinking tequila, listening to music, I don’t have to pretend ”.

The singer did not completely close the door to a reconciliation with Lorenzo, but made it clear that if she does it it will be by her own decision and not by external pressure.

Also the weekend Lorenzo had dedicated a message to him on Instagram on the occasion of his birthday, but -at least publicly- Chiquis did not respond.

“Happy birthday to my precious gift from God,” Méndez wrote to accompany a photo of Chiquis when she was little.

It was she who confirmed in early June that there were problems with Lorenzo.

Later Lorenzo issued a statement to confirm the marriage crisis where he referred to her as his “still wife” and Rivera responded with the same coin on Father’s Day by congratulating her “still husband”.