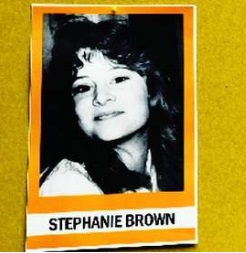 Stephanie Brown, 19, of Sacramento was sexually assaulted and strangled, her body dumped in a ditch. A crumpled map was found near her car parked along I-5.

On July 15th, 1986, 19-year-old Stephanie Brown had given friends a ride home after a night out near the Pocket Road area. Her car was found abandoned on I-5 at the Hood Franklin exit. It is unclear why she pulled over. Her killer gave two reasons, neither of which law enforcement believes. Instead law enforcement thinks Kibbe performed a false traffic stop in order to abduct Stephanie Brown.

Her body was found several hours later off Correia Road, south of Highway 12 in San Joaquin County. She had been strangled and visible marks from restraints were on her wrist. Her clothes and hair were cut.

Stephanie Brown’s mother, Jo Allyn Brown, said the words “murder,” “rape,” “autopsy” and “body bag” make her chill. The terms often come up in the news and immediately take her back to her daughter’s murder 23 years ago, she said.