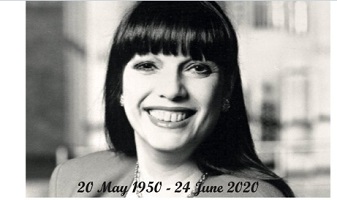 Popular British organist, Jane Parker Smith has passed away. Jane Parker Smith died on Wenesday June 24 2020 at the Chelsea and Westminster Hospital. The celebrated organist died at the age of 70. Jennifer’s cause of death was not disclosed to the public.

Jane Parker Smith made her debut as a 20-year-old at Westminster Cathedral and played at the 22nd at the BBC Promenade Concerts at the Royal Albert Hall.

She has made the CD series “Romantic and Virtuoso Works for Organ” and “Popular French Romantics”. She also made albums with music by Louis James Alfred Lefébure-Wély, Widor, Liszt and Saint-Saëns, among others

We were extremely sad to hear yesterday of the sudden death of concert organist Jane Parker-Smith. She was a wonderful performer and will be greatly missed. pic.twitter.com/0EydWXFGz0

I’m saddened to hear of the death of Jane Parker-Smith. What a fabulous, inspiring and iconic artist. pic.twitter.com/0merMMi6aQ

@john_jmbrad11 So sad to hear about Jane Parker Smith, her recording (below) of Widor’s 5th and 7th Symphonies were major turning points in me in my teen years wanting to pursue the organ. https://t.co/k9PzpA6Ign

Captain Alice hasn’t been on Social Media because sadly her lovely stepmum died on Wednesday. Jane was amazing – she travelled the world inspiring everyone with her music! Jane Parker-Smith. 20 May 1950 – 24 June 2020 💓 🎵 pic.twitter.com/QXXedJxq2D

I am sorry to hear of Jane Parker Smith’s passing. The ‘Martha Argerich of the organ’ was undoubtedly one of the finest organists of her generation, she had a prodigious technique and was always so exciting to listen to.

So sorry to hear that the great Jane Parker-Smith has died. Had a drink, or two (!) with her in early March but the photographs do neither of us justice! So listen to this. I love it. Ex @RCMLondon student playing music by our former Director. https://t.co/IofSNQpOOK

Things You Need To Know About Jane Parker Smith

Described as “the Martha Argerich of the organ” (The Sunday Times), Jane Parker-Smith is internationally recognized by the critics and public alike for her musicianship, virtuosity, entertaining programs, and electrifying performances. An innate interpretative ability, prodigious technique, and flair for tonal color are the hallmarks that make Jane Parker-Smith one of the most sought-after organists in the world.

Her studies at the Royal College of Music in London were crowned with a number of prizes and scholarships, including the Walford Davies Prize for organ performance. After a further period of work with the eminent concert organist Nicolas Kynaston, a French government scholarship enabled her to complete her studies in Paris with the legendary organist Jean Langlais, perfecting the knowledge and understanding of twentieth-century French organ music for which she is today internationally renowned.

She made her London debut at Westminster Cathedral at the age of 20, and two years later made her first solo appearance at the BBC Promenade Concerts in the Royal Albert Hall. She has since performed in concert halls, cathedrals, and churches throughout the world.

She has recorded a wide range of solo repertoire for the RCA, Classics for Pleasure, L’Oiseau Lyre, EMI, ASV, Collins Classics, Motette, and Avie labels. In addition, she has collaborated with the renowned Maurice André in a duo recording of music for trumpet and organ. She has performed numerous times on radio and television with special feature programs on the BBC, German, and Swiss television.

Parker-Smith is an Honorary Fellow of the Guild of Musicians and Singers and a member of the Incorporated Society of Musicians. She is listed in the World Who’s Who and the International Who’s Who in Music and in 2014 was chosen as one of the “1000 Most Influential Londoners” by the London Evening Standard newspaper.