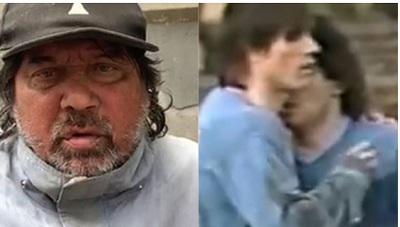 Meet Pietro Puzone one of the best players who knew how to be part of the winning squad of Serie A and the Italian Cup of the 86-87 season.

The name of Pietro Puzone is found in the great history of Napoli , since he was part of the team that obtained the first Scudetto of the institution from the hand of a brilliant Diego Armando Maradona . He also won the Italian Cup that same season (in the final they prevailed against Atalanta).

33 years after that feat, that young right-winger made headlines again and his case moves Italy. Today he is destitute and lives on the streets. She usually sleeps on the benches in the squares of the municipality of Acerra, located 14 kilometers from Naples and has addiction problems.

The news became important when Gianni Simioli, an announcer for Radio Marte , said he found Pietro “in an inhuman condition . He became destitute. Sleep on benches and you are probably sick. We reported this situation to the mayor, but nobody intervened. ” In turn, a member of a WhatsApp group called Vecchio Nápoli (Old Napoli), made up of former players and managers from the whole of southern Italy, found him in Acerra and had him record a video with a greeting for his former colleagues .

Before the commotion that originated in this town of less than 60,000 inhabitants, Raffaele Lettiere, the mayor, publicly expressed: “ We dealt with him in May, in the emergency of COVID-19 and the previous conversations he had with the service for the Drug addiction did not work . If his former teammates made him feel important, it could be a good encouragement. ”

In addition to Maradona , within that team led by Ottavio Bianchi were names such as Ciro Ferrara, Andrea Carnevale, Bruno Giordano and Salvatore Bagni , among others.

Puzone , arisen from the Neapolitan quarry, did not get to dispute any party in that season, since he was the fourth forward (he was behind Diego, Carnevale and Giordano). He was sitting on the substitute bench four times during that Serie A championship of the 1986/87 season: Torino, Sampdoria, Atalanta and Como . He did enter a match in the Italian Cup : he did so with one minute left in the clash against Cagliari .

According to Il Mattino , Pietro and Maradona established a “strong bond, especially outside the field.” The newspaper affirms that both participated in “nights marked by transgression . ” They also say that he consoled Diego after he missed a definition penalty against Toulouse , which cost Napoli the elimination in the first round of the 1986/87 UEFA Cup.

Pietro Puzone , who is currently 57 , retired from professional football in the 1996/97 season , defending the US Boys Calvanese jersey . While his sports career lasted, he played in clubs such as Cavese, Akragas Calcio, Catania and AC Spezia . The vast majority of those sets militated at that time in the B Series . Undoubtedly, his great sports milestone was having played in that Napoli that was the Serie A champion in 1987 with 42 points , followed by Juventus with 39 units