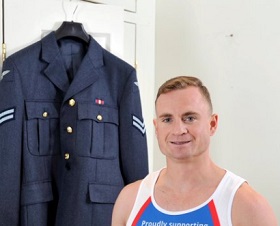 Former RAF Lossiemouth serviceman and ultra distance athlete Jon Ward has passed away. Jon Ward was reported to have died this week. Jon Ward cause of death was never disclosed to the public.

The 34 year old Athlete was a member of the Moray Road Runners (MRR) club raised thousands of pounds for the RAF Benevolent Fund through his job as a logistics mover at the Moray air base.

In 2018 he ran his 100th marathon and became the first person to run the entire length of the North East 250 route, a full distance of 260 miles which he completed last year.

Earlier this year he moved to Glasgow to work in the Armed Forces careers office, but had returned to Moray at the start of this week to train with his club and prepare for a 100 mile run across the Moray Way route in aid of the Samaritans charity.

The tweets reads below:-

We are saddened to hear of the death of Cpl Jon Ward. Jon had supported us for a number of years, with some incredible running challenges including running 100 marathons in a year to mark the RAF 100 as well as becoming the first person to run the North East 250 tourist trail.

Air Vice-Marshal Chris Elliot, Controller of the RAF Benevolent Fund, said: “We are deeply saddened at the news of Corporal Jon Ward’s death and our sincere condolences go to his family and friends.”

“Jon was always thinking of others and did so much to support charities, including the RAF Benevolent Fund. His endurance running feats were an indication of his determination to do whatever he could to support his community.”

“I am sure he will be greatly missed by all who knew him and we are thankful for all he did to support our charity.”

We are saddened to hear of the death of Cpl Jon Ward. Jon had supported us for a number of years, with some incredible running challenges including running 100 marathons in a year to mark the RAF 100 as well as becoming the first person to run the North East 250 tourist trail. pic.twitter.com/V9qsGrY5bO

The RAF Lossiemouth in as series of tweets also reacted to the sudden demise of Corporal Jon Ward.

In a series of tweets they wrote

We are deeply saddened by the news of the passing of Corporal Jon Ward earlier this week.

Selfless, courageous, kind, and genuine – Jon epitomised the values of the @RoyalAirForce at their core. Jon was the first to give back to his community, raising thousands of pounds for the @RAFBF in a number of events.

Most notably, Jon ran 100 marathons to celebrate RAF100, and was the first to complete the @North East 250 on foot. Jon departed RAF Lossiemouth last year, but maintained close ties with friends from Lossie and the local running communities.

“Nothing I can say will truly describe the person that Wardy was to his friends & peers.

We will treasure our memories with him and remember him at his best.

He was more than a colleague, he was a man you could rely on to help you. It was a pleasure to know him.”

This weekend Jon was due to run the 100-mile Moray Way with friend and fellow runner John Anderson, raising money for the @Samaritans.

He leaves behind a void that cannot be filled.

His kindness and compassion will be missed within the RAF Family, within the Ultrarunning and Marathon running communities, and by those who knew him so well in our local communities and further afield.

All of our thoughts at RAF Lossiemouth are with Jon’s family, friends, and colleagues during this difficult time.

Condolences from all onboard to his family and colleagues ⚓ Sounds like a top bloke who will be missed.

Such sad news – my thoughts are with family, friends and the teams Jon supported @RAFLossiemouth & @RAFBF

RIP Jon Ward , this is such a sad loss to everyone who knows him , my thoughts are with his family , his running family will greatly miss him pic.twitter.com/SEpTzEacid

Sadly we lost my Cousin, Jon Ward @runningwithwardy yesterday, he is sadly missed 💖

He was a Avid Fundraiser for the RAF and other causes.

he was due to do a run tomorrow to raise money for the Samaritans, as during COVID-19 they have Worked so har… https://t.co/pi0gYCpEjk pic.twitter.com/fCzucG5ISS

Sadly we lost my Cousin, Jon Ward @runningwithwardy yesterday, he is sadly missed 💖 He was a Avid Fundraiser for the RAF and other causes. he was due to do a run tomorrow to raise money for the Samaritans, as during COVID-19 they have Worked so hard to help the public getting through this crisis. Please if you can spare any money to help them out in his name, it would be a wonderful gesture. please check out his @justgiving page: https://www.justgiving.com/fundraising/jandjmoraywaychallenge .  I would like to thank @jfosterr_98 ,his nephew, for bringing this to my attention. #rip #youwillbemissed #cousin #wewillremember #weloveyou #forjon #runningwithwardy #restinpeace #jonward #raf #royalairforce #royalairforceuk #running #northeast250 #ultrarunning #marathonrunning #rafbf #fundraising #100heros #celebratehislife #charity #thesamaritans #justgiving #justgivingpage

Corporal Jon Ward’s great talent for running over a wide range of distances was notable.