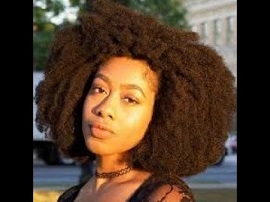 Shona Donahue A.K.A Napp Queen was a beautiful natural hair Youtuber who was stabbed to death by her ex boyfriend in Washington DC.

They grew up together and were sweethearts at Oxon Hill High School. When Shana Donahue left for college in South Carolina on a basketball scholarship, her boyfriend, Daniel Fleetwood, along with her father, drove her to school and helped her move into her dorm.

But on Thursday, some 10 years later, D.C. police say, Fleetwood stabbed and strangled Donahue in the apartment the two briefly shared in 2900 block of N Street in Southeast Washington. Authorities charged Fleetwood with first-degree murder while armed.

In a telephone interview, Phillip Donahue, Shana’s father, said that the couple “loved each other” but that his daughter broke up with Fleetwood about two years ago. Then, about a month ago, they got back together, and Fleetwood moved in with his daughter.

“She was a good soul. A good soul. I don’t know what could have caused him to do this,” the father said.

Shana Donahue, 26, was a teacher at Freshfarm FoodPrints, visiting D.C. public schools and teaching students about nutrition, her father said. She also had a presence on YouTube, where she posted videos about natural hairstyles under the names “Napp Queen” and “MercuryVenusMe.” She had more than 21,000 followers.

Early Thursday morning, a neighbor who went to check on Donahue saw her body, according to court documents. Another neighbor called 911 and described hearing a “loud fight” from the apartment the night before.

Officers arrived to find a horrific scene inside.

Donahue’s body was in a fetal position, near a glass table between the living and dining room area and the kitchen, according to the court papers. Police said in the documents that her arms and face were bloody. There were puncture wounds to her neck, stomach, right bicep, right thigh, hip and shoulder blade. Bite marks were found on her right wrist.

There was blood on the door, the walls, a pair of scissors and a knife.

According to the documents, as police were on the scene, Fleetwood walked into the apartment, his clothes covered in blood, and asked to speak to “Shana,” telling police that afterward “everything could be explained.” Fleetwood, 26, told police that he had been in a fight with Donahue the night before and that he left the apartment.

Homicide detectives took Fleetwood to police headquarters, where he agreed to be interviewed, according to the documents, which lay out his account.

Fleetwood told detectives that he and Donahue got into a shouting match and she ordered him to leave the apartment. He said they began pushing each other. Then Fleetwood told the detectives that Donahue stabbed him first with a pair of scissors and that he grabbed the scissors out of her hands and defended himself.

“She tried to get me really angry on purpose and I don’t know why,” Fleetwood said, according to the documents. “It’s like a thing all women have. Yeah, she was trying to get me upset. A man has to die to be truly in love. I never had this done before. I think it’s a devilish type thing. It’s hard to explain. I can see it. When you are in a relationship with a girl, it’s like a psych thing.”

Fleetwood said that the two began stabbing each other and that she stopped. But he continued. “It was like something in me, like the demon in me wanted to kill and once I killed her I came alive,” the documents say he told detectives. Fleetwood also told police he had been drinking alcohol and smoking marijuana before the fight.

Davies argued that Fleetwood, who did not have any prior arrests or convictions, had acted in self-defense and should be released from custody. “This was a domestic situation that clearly really got out of hand,” Davies argued. But Herrmann agreed with the federal prosecutor that, based on the evidence in the case, Fleetwood should be held in the D.C. jail until his next hearing, on July 29.

Phillip Donahue said his daughter had dated other men when she was apart from Fleetwood, but those relationships did not work out. He said she never told him that Fleetwood was abusive, showed signs of mental illness or had a violent temper.