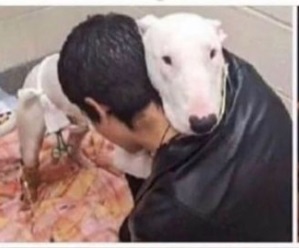 Pana Walter, The dog that people use his face to make staring meme is not dead, according to the owner.

Official statement from Walter Mom, Owner of Nelson aka “Walter”

Hello, users of the internet. I don’t know where this image originated, but i am happy to report that Nelson is not dead. The injured dog in the vet photos is named billy. He was shot protecting his owner during an armed robbery, but has since made a full recovery (See Second Slide). Billy doesn’t deserve to be used as a hoax to spread sadness. Billy deserves great recognition for his bravey and awesomeness. If anything (god forbid) ever happens to Nelson, updates will come his social media accounts, here and on twitter, Anything else you see online is just a rumor.

there is no “pana walter.” some dumbass on the internet stole a picture of a nice lil dog named Nelson and slapped the name “Walter” on him and the internet hyped that up. the owners of nelson were upset to find out the internet was laughing at their dog and they didnt get credit