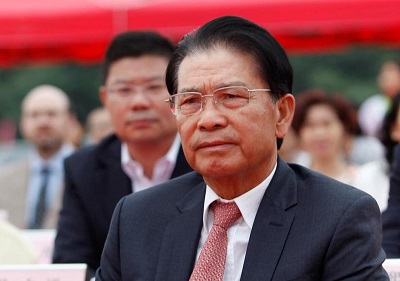 The security operatives in China has managed to rescue the founder of Midea, He Xiangjian hours after he was kidnapped.

Mr He Xiangjian was taken hostage at his luxurious mansion in Foshan, near Hong Kong. The criminals had long weapons and explosives.

The billionaire founder of the world’s largest appliance maker, Midea Group , was kidnapped by intruders at his South China home before being rescued by police, multiple media outlets said Monday.

The police statement only identified the victim by his last name, He , but the business magazine Caixin , the Beijing News newspaper and other media said it was He Xiangjian , 78, the founder of Midea .

The company thanked the police in a statement on its social media, but did not confirm that He Xiangjian had been implicated . Midea’s press office did not respond to calls for comment. A man who answered the phone at the Foshan Police Station said he was unable to comment on the case.

The police statement noted that the event had occurred in the Junlan Life Village , which Caixin described as an individual housing neighborhood built by Midea .

The tycoon is the fourth richest person in China, with an estimated net fortune of 180 billion yuan ($ 25 billion) , according to the Hurun Report , which studies the country’s great fortunes.

Midea reported revenue of 280 billion yuan ($ 32.9 billion) in 2019. Among its 200 subsidiaries is Kuka , a German manufacturer of robotic technology. The company was born as a workshop founded in 1968 by He and other residents of Beijiao , a town that is now part of Foshan .

The founder retired from the company’s operations in 2012, but has a seat on the board of directors. Her son, He Jianfeng, 55, who is a senior executive at the company, managed to escape, dodge the persecution of the captors, swim across a river and call the police.

According to this report, the 77-year-old magnate was taken off his property by a commando group carrying long weapons and explosives.

Police received a report around 5:30 pm – Jianfeng’s call – Sunday that outsiders at the complex had broken into a residence at Royal Orchid International Golf Villa , a luxury project developed by the Midea Group that includes a course 18-hole golf course and a sports center.

The 336-unit mega real estate development is located in the Shunde district , about a kilometer from the company’s headquarters and an hour’s drive from the provincial capital of Guangzhou, according to local media.

In photos and videos circulating on social media, a dozen police officers can be seen surrounding a two-story European-style mansion in that villa decorated with white marble Roman columns at the front door and topped by a coral brick ceiling. A small river about five meters wide flows near the mansion where criminals stormed .

The police closed the commune completely and residents were prohibited from taking to the streets between Sunday morning and Monday. The surroundings of the Midea owner’s property had at least two surveillance posts that would have been evaded or reduced by the kidnappers. Police investigators are currently working on the expertise and at the moment did not give further details .

He Xiangjian retired in 2012, his family still controls about a third of Midea . It also controls six other publicly-listed companies, including Midea Properties in Hong Kong and German robotics company Kuka .