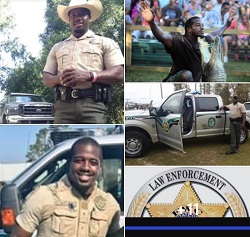 According to reports, Julian Keen shot and killed in LaBelle early Sunday. Authorities said 30-year-old Julian Keen was off-duty in the area of Nobles Road and Apache Circle when he was shot. This is near the intersection of SR-78.

He grew up in LaBelle and played football before going on to play at Webber International University in Babson Park, Florida. The WIU athletics website says Keen transferred there in 2010 from College of the Desert in California. Keen was named 2007 South-Central All Star Defensive MVP, the site says.

Florida Highway Patrol Command Officers Association confirmed that Julian Keen was murdered last but didn’t the identity of the man who shot and killed Julian.

“FHP Command Officers are praying and remembering our fallen but NEVER forgotten brother, FWC Officer Julian Keen, who was murdered last night while following his calling to protect and serve others. He was a genuine officer who would literally give his shirt off his back to ANYONE who needed it. Please pray for his family and law enforcement everywhere as we face these troubling times.John 15:13 – “There is no greater love than to lay down one’s life for one’s friends.”

Lovely Aviles wrote “THIS CAN’T BE REAL LIFE MAN!!!!! WHY YOU OUT OF ALL PEOPLE!???Julian Keen YOU WOULD NEVER HARM NOBODY,ALWAYS WANTED TO DO THE RIGHT THING & WAS ALWAYS A AWESOME PERSON TO BE AROUND! YOU WILL MOST DEFINITELY BE MISSED  MY HEART HURTS”

Our thoughts and prayers are with the Florida Fish & Wildlife Commission on the loss of Officer Julian Keen. Julian was shot and killed last night while off-duty trying to stop a hit and run driver. He selflessly died in the service of others.#NeverForget pic.twitter.com/RT39RL2bsb

Officer Julian Keen of LaBelle, FL was shot while pursuing a hit and run last night. While I don’t know all the details, I do know that he was loved by all in the community. This is a tragic loss.

Please keep Julian’s loved one and LaBelle in your prayers. pic.twitter.com/nJzMC7VFGi

JJ McCoy Wrote “The world lost a good friend last night! Julian Keen was great dude, I remember the first time we started talking years ago, I said something about his name because Julian is my son James Mckellar’s name and it was also my Grandpa’s name the original JJ McCoy! He would come out every time I played in Labelle, he always struck me as EVERYONE’S friend! We will miss you my friend R.I.P. Juian.”

Raymond Mitchell wrote “R.I.P Julian Keen this is true heavy blow. This guy was one of the most humble guys I ever met one of the best teammates I ever had. My heart is heavy right now. Prayers going up to all family and friends this hurts man”

South Florida Cops have also sent their condolences to the family Julian Keen. In an official Facebook post they wrote “We send our heartfelt condolences to the family and friends of Officer Julian Keen and the FWC (MyFWC Florida Fish and Wildlife) for his loss. Officer Keen was tragically shot and killed early this morning while reportedly taking action while off-duty on a hit and run crash. Our thoughts and prayers are with his family, friends, the State, and the FWC during this difficult time and we thank him for his service and sacrifice. Rip hero. Your life mattered.”