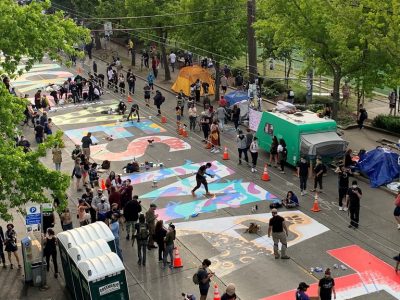 After several days of violent clashes with protesters, the police withdrew from a neighborhood in which the non-conformists created a camp that was greeted by the Democratic mayor and obfuscated the US president Donald Trump.

Violent protest in Seattle had police largely withdrawing from a neighborhood where protesters created a kind of festival that has President Donald Trump furious .

Trump was angered on Twitter by Governor Jay Inslee and Mayor Jenny Durkan over the situation, saying the city had been taken over by ” anarchists .”

” Take back your city now. If you don’t do it, I will do it , “said the president on the social network.

The “Capitol Hill Autonomous Zone”(CHAZ) emerged after police removed barricades near the Eastern District Police Station on Monday and practically left the structure after officers used tear gas, irritant spray, and stun grenades in order to week to disperse protesters, whom they said were being attacked with projectiles.

“The mayor of Seattle said, about the anarchists who took her city, that ‘it is a summer of love.’ These liberal Democrats have no idea. Terrorists burn and loot our cities and they think it is wonderful, despite the deaths. The takeover of Seattle must be finished now! ”, Wrote the president.

The president has already had friction with Inslee and Durkan, both Democrats. Inslee had tried to obtain the presidential candidacy of its party.

The governor tweeted Thursday that state authorities will not allow threats of military violence by the White House. ” The United States military serves to protect Americans, not the fragility of an insecure president ,” he wrote.

The area established by the protesters spans several blocks from the Capitol Hill neighborhood , where dozens of people flock to hear speakers calling for police reform, racial justice and compensation for the Native American groups on whose land the city of Seattle was founded.

There are signs that read: ” You are entering Capitol Hill free ” and ” No police cooperative .” On the sidewalks, some people sell water and other products.

” From what I understand, we are trying to reclaim our community so that we can live without a huge police force patrolling the streets ,” Michael Taylor told The Seattle Times .

Over the weekend, the police came under fire from members of the city council and other elected officials . Since the agents eased their tactics, the protests have been largely peaceful.

Police said they are seeking to reopen the police station. At a press conference on Wednesday, Deputy Chief Deanna Nollette said the barriers were removed from the front of the building after it became a focus of tension between police and protesters. 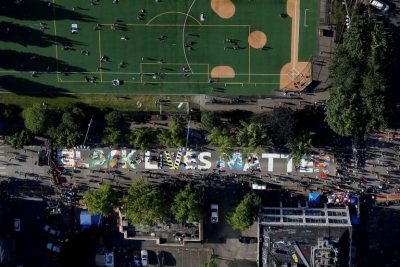