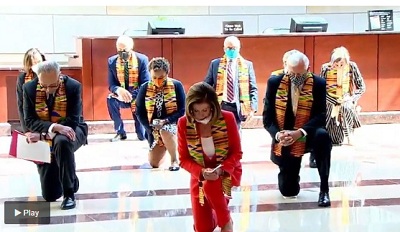 The legislation would allow officers with misconduct to be prosecuted and the families of the victims could seek compensation. The proposal would be debated this month, but could face resistance in the Republican-controlled Senate.

Democratic lawmakers in the United States Congress knelt on Monday to honor George Floyd and other black Americans “who have lost their lives unfairly” at the hands of white police officers, moments before presenting a proposal for organic reform of the Police.

Democratic President in Congress Nancy Pelosi  and her party’s minority leader in the Senate, Chuck Schumer , as well as some 20 opposition MPs, including several black representatives , gathered in the so-called “Emancipation Hall” in tribute to the slaves who worked in the construction of the legislative headquarters in Washington, the Capitol, in the 18th century.

The duration of the tribute was not accidental: it lasted 8 minutes and 46 seconds. That was the time a white cop spent his knee resting on the neck of George Floyd , a 46-year-old African American, until he was killed by suffocation on May 25 during his arrest for a complaint of alleged use of a counterfeit bill.

All lawmakers wore kente scarves, a fabric typical of Ghana and characterized by its multicolored lines of cotton or silk, which the Black Caucus of Congress has often used to symbolize their work and the African roots of their culture.

The bill would allow victims of misconduct and their families to file financial damages against the police, limiting the legal doctrine known as qualified immunity. Also, it would make lynching a federal hate crime.

Democrats hope to bring the legislation to the full House of Representatives before the end of June. But his reception in the Republican-controlled Senate is unclear, with Senate Majority Leader Mitch McConnell without committing to the need for the legislation.

The proposed legislation also prohibits officers from holding or holding breath to the neck of persons holding them.

Floyd’s death caused outrage in the United States and the world, sparking multiple protests against racism and police brutality across the country, generally peaceful in tone and some violently repressed by law enforcement. A wave of criticism has also been raised against the government of the Republican Donald Trump for his heavy-handed strategy to deal with the crisis.

This Sunday, it was announced that the Minneapolis City Council committed to dismantling its Police Department to completely rebuild it. The four officers involved in the Floyd case were indicted on charges and the asphyxiated man is charged, inter alia, with involuntary manslaughter and manslaughter.

(With information from AFP, EFE and Reuters)