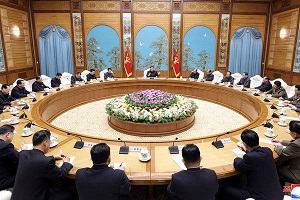 The countries of the peninsula exchange two calls a day through the liaison office, as agreed by the leaders of the two governments. Kim Yo Jong’s sister had warned of the possible closure of the office because of pamphlets released by defectors and activists from across the border.

North Korean authorities have not responded to a call from the South through the liaison office for the first time since this mechanism was created , in September 2018, days after the Kim Jong-un regime threatened to shut it down. as a protest against the sending of propaganda at the common border.

Neighboring countries exchange two calls a day through the liaison office, as agreed by the leaders of the two Koreas during the historic visit made by South Korean President Moon Jae In to North Korean territory.

A spokesman for the South Korean Unification Ministry, Yoh Sang Key , reported on Monday that “for the first time North Korea has not answered the call” this morning. “We will try again in the afternoon, as planned,” he said at a press conference, according to the Yonhap news agency .

The sister of North Korean leader Kim Yo Jong released a statement Thursday warning of the possible closure of the office by leaflets released by defectors and activists from across the border. It considers these shipments contrary to the commitments made.

He also threatened to close the cross-border liaison office and to break the military agreement signed during Moon’s visit to Pyongyang in 2018 , which aimed to ease tensions on the border.

“First we will definitively withdraw the inactive joint North-South liaison office, ” a spokesman for the United Northern Front Department, which is responsible for inter-Korean relations, said in a statement released Friday by KCNA.

The closure of the office could be followed by “various measures” to sanction Seoul, the spokesperson added. “We are about to take measures that could soon hurt the South to suffer,” he said.

Senior South Korean officials said they would push to promote a law banning the release of brochures, but the announcement has sparked debate over the possible violation of freedom of expression.

A senior official in the South Korean presidential office said the leaflet campaign does “more harm than good.”

Activities in the liaison office have been suspended since the start of the new coronavirus pandemic.

(With information from Europa Press and AFP )