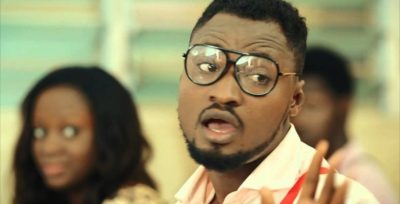 Funny Face predigament started when his ex-wife ran away with his loved twins, Ella and Bella.

In a viral video uploaded on Youtube had the Funny Face angrily issuing  a stern warning to his ex-wife and mother-in-law to bring his daughters back, giving them one-week ultimatum to return his daughters else he will go berserk.

While speaking in the video, Funny Face, called his ex-wife by name Ama Vanessa and warned her to be careful since the same people pushing her to take certain decisions are the same people mocking her adding that she might ruin the future of the children for him if she doesn’t listen to his advice.

He threatened to expose her should she come out to make any comment or react to anything regarding his daughters or about him. Funny Face revealed he has many videos and audios as pieces of evidence to bring her down.

Benson Nana Yaw Oduro in 206 attempted blow his brains off with a gun many times over his “bitter” now ended marriage with his ex-wife Elizabeth Nana Adjoa Ntim.

The story which went viral at that time was posted on social media said:
“Funny Face was suicidal for many months and at one point in time, he even went to the beach with gun, ready to blow his head.” one of the sources stated.

We are told Funny Face couldn’t take the disrespect and the fact that his wife was sleeping around—especially when she had in the past confessed to cheating and yet there was no way it seemed she was about to stop.