#JusticeForBarakat: An 18-year-old student, Barakat Bello was allegedly raped and killed by some men at her home in Ibadan yesterday.

The hijab-wearing Barakat Bello was allegedly murdered while she was struggling to resist rape.

You see this beautifully covered lady?
She got RAPED and MURDERED around her Akinyele home in ÌBÀDÀN yesterday!!#JusticeForBarakat#JusticeForUwa#JusticeForTina#SayNoToRapist pic.twitter.com/XbvhO2xH6k

Barakat Bello was a 19-year-old student of Federal College of Animal and Production Technology Moore Plantation, Apata, Ibadan, She was stabbed to death after her assailants raped her. Her corpse was found near the house in Akinyele Ibadan.

Baraket’s father, Mr Kasimu Elepo while speaking told Sahara Reporters that he was not at home when the incident occurred.

He disclosed that the deceased’s sister was also out of the house at the time the tragic incident occurred.

According to him, the victim’s sister found Barakat’s body at the back of the house in a pool of blood when she returned from Qur’anic lessons.

“I was not at home when the incident happened. The younger sister was not at home too, she went for Qur’anic lessons but when she returned home, she saw her at the back of the house with deep cuts all over her body. She had been raped and killed.

“Somebody called me on the telephone that I should come home but he refused to tell me what happened. When I got home, I saw that my daughter had been raped and stabbed to death.” He revealed 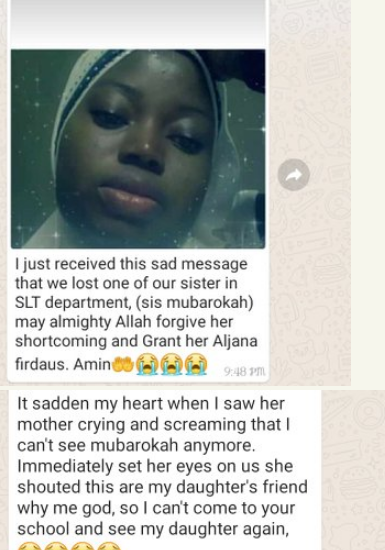 Baraket before her death was a member Muslim Students’ Society of Nigeria She was buried on Tuesday according to Islamic rites.

The murder of the teenager has sparked protests on Twitter with the #JusticeforBarakat on social media demanding that the government should do everything possible to halt the rape insurgence in the country.

The news of Barakat came when the entire nation was clamoring for the imposition of law militating the eventual rise of  rape and victims of rape after a similar incident took place  on May 27 2020 when Vera Uwaila Omozuwa a  student of Redeemed Christian Church of God, Miracle Sanctuary Mega Parish, Edo Province 10, Ikpoba Hill area of Benin City was raped and killed by her assailants in most wicked situation. 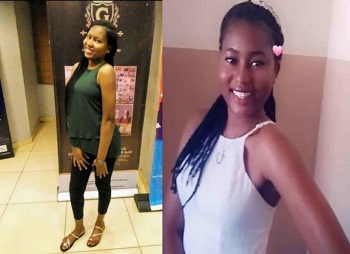 The 100-level student of the University of Benin, Uwaila Omozuwa was killed when  the evil men forced their way into the church, where she praying raped and struck her  in the head with a fire extinguisher.

According to reports gathered from a reliable source revealed that the church security guard working in the church vicinity discovered Uwaila Omozuwa’s lifeless body when he wanted to collect the key to the church reportedly called for help and the victim was rushed to the University of Benin Teaching Hospital.